It is Sunday afternoon, and once again the haze has burned off to a glorious day. I am back at the University, ready to load the pictures from yesterday. Congratulations to Bob and Glenn who knew the answer to what famous movie was filmed at Doune Castle. Bob tried to include Ivanhoe, but come now. FAMOUS movie. Take a look at the castle and you decide. 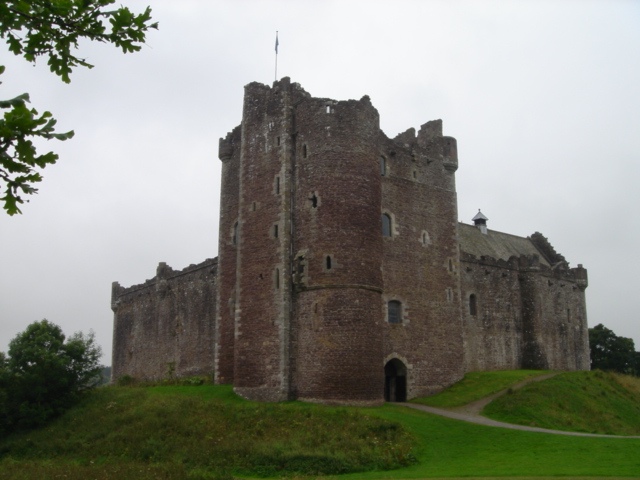 It's a little hard to tell, since it's daytime and you can't see the grail-shaped beacon shining above the tower. That's right, Monty Python and the Holy Grail was filmed here with this serving as several of its many castle locations. It was in this courtyard that Sir Lancelot disrupted a wedding, slicing his way up the far stairs... 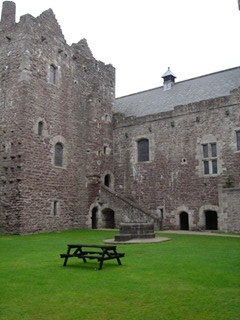 Only to find that the fair maiden who was imprisoned against her will, was a young man who was into musicals. He sent his message from yon window... 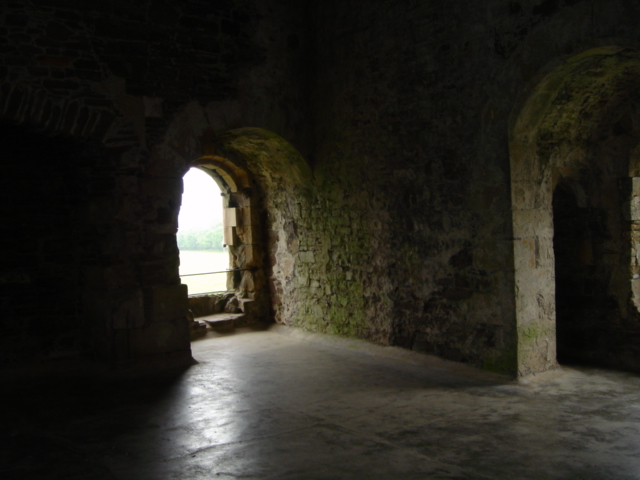 The place where the guards stood is not really an exit!
And of course there were the French. "Is there anybody else up there I can talk to?" 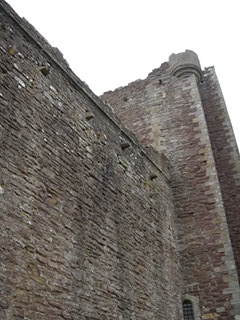 "What if we built this large wooden badger?"
From Doune I went a bit further northwest to the town of Callander, where there were Highland Games. This is the season for Highland Games and every weekend they are going on somewhere it seems. I got to Callendar a couple of hours before the games were to begin and strolled their streets for a bit. After a ham and cheese toastie (grilled ham and cheese) with salad (I have yet to get salad dressing with a salad. Mostly you eat them dry...or I'm clueless about what I'm supposed to do with it), I caught the free bus out to the games site.

The Highland Games are basically a fair with kilts. There are all the usual fair items...junk food stands, games where you can win giant stuffed Disney toys, kiddie rides...plus rounds of competitions. It's in the competitions that the Highland stuff comes out. There are dance competitions. Here are a couple shots from the youngest category. 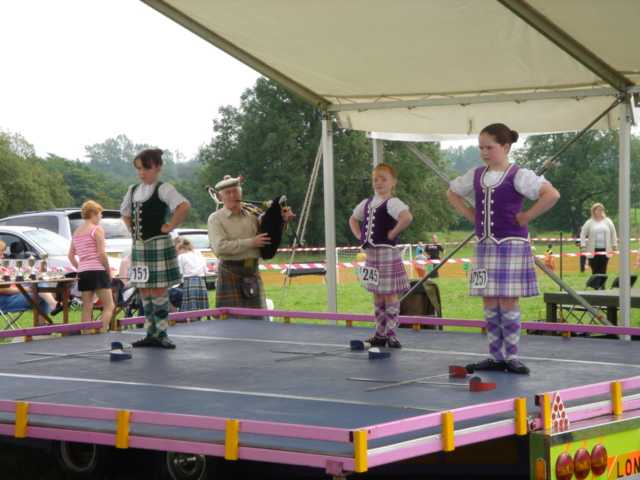 Let the dance begin. The piper behind provides the music. A stage for the older competitors is right behind this one, with all of them dancing to the same tune at the same time. 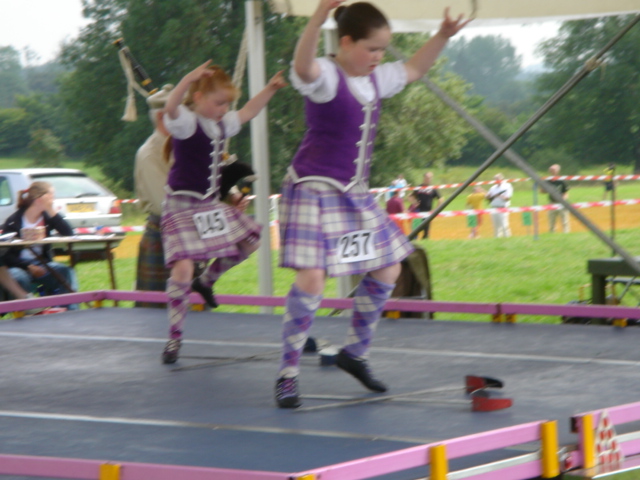 Girls and boys competed together. There are competitions in piping, both solo and band 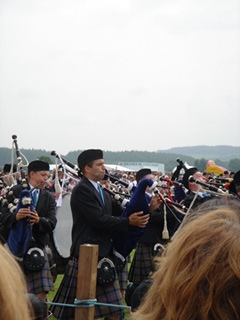 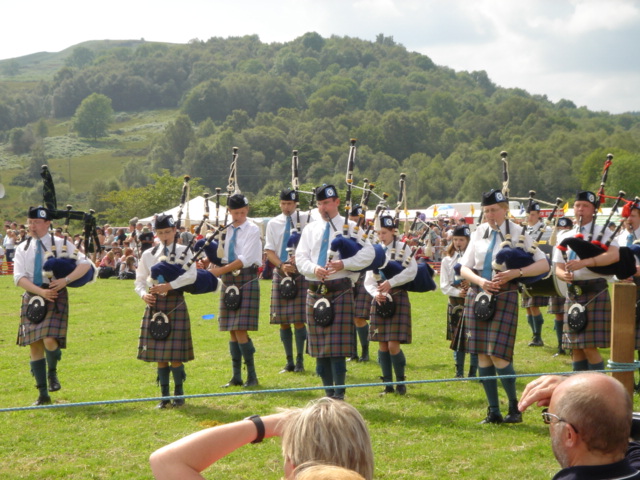 And various solo competitions for shot put, lifting, and such things. I have some video of those as well as the dancing. Rob, is there a way for me to put the videos up somewhere else on my site, since I don't seem to be able to put them in the blog? Will someplace else accept them? They are mpeg files.
In another part of the grounds there was a dog show. 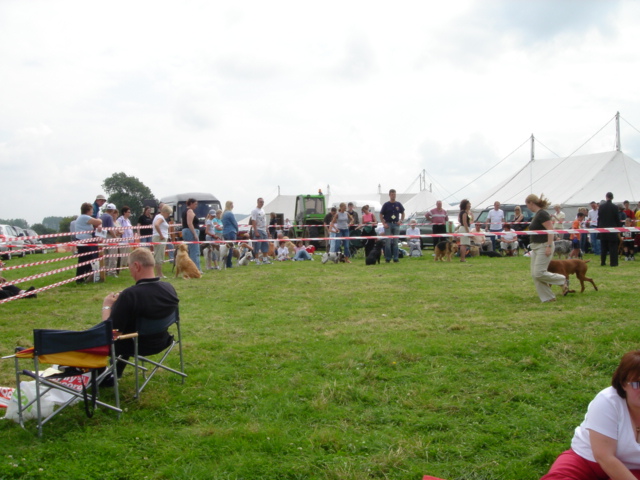 And as hokey as this is, I couldn't resist the opportunity to be a bit closer to this lovely Harris Hawk. 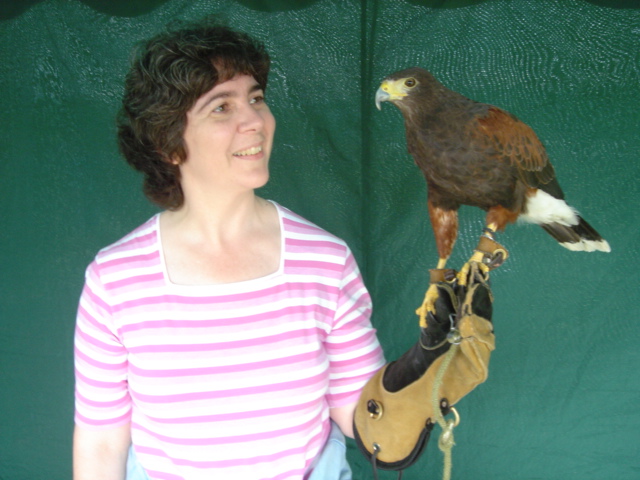 It was one of the concessions. They had a number of birds of prey...several owls of various sorts, a peregrine falcon, and two hawks. I bonded with this fellow while waiting, so I picked him. The Harris Hawk is native to South America.

After roaming the games for a bit, I took the bus back to town and went through the Rob Roy visitor center, learning more about the rogue/hero Rob Roy MacGregor. After all that talk of cattle droving and greiving, and after learning that the term "blackmail" comes from paying the "Watch" to be sure that no one stole your cattle (black) as the drover took them to market, I was in the mood for cows. So I left Callander and went a little further along that road. Meet Hamish. 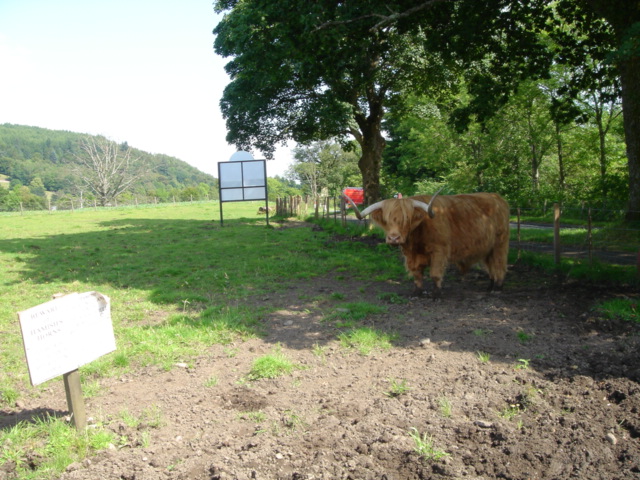 The sign says "Hamish is friendly and gentle. He is also a bull. You should respect that." Then it asks you not to feed him cake or pull on his horns. Could anyone resist this face? 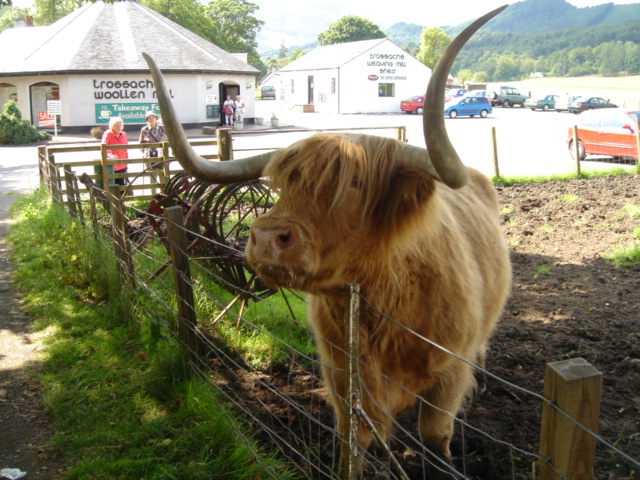 After a visit with Hamish, my bovine urges were satisfied and I headed back toward Stirling. On the way I stopped at the Arts and Antiques Center that I mentioned in my post yesterday where I had tea with the elderly gentleman. Then I came back here to the university to put things up, driving around for quite some time looking for the obscure back entrance that John had shown me earlier. I had a similar tour on foot when I left, as I tried to remember where I put my car. I had never found the back entrance, and so had wandered quite a ways once I had parked. But eventually I made my way back to the house and got ready for this morning.

Church this morning was a delight. I messed up a couple of things, but the congregation seemed to be able to go with the flow quite nicely, and if anyone was disturbed, they were kind enough not to say so. I didn't bring the camera to church this morning, but I should have. I love their communion trays. They are wooden rectangles with a brass carrying handle on top. The tray has rows of holes for the cups. There were two slightly different styles of them. Of course they don't stack, so we would need an altar the size of Alaska to accommodate the number we would need, but I really thought they were pretty.

I have met a whole crew of people and many have invited me places, so my social calendar is filling up. Tomorrow night I am joining one couple for an ecumenical Taize service at the Catholic church, so I'm looking forward to that.

After church they had a potluck to welcome me to the church. Their term for it is a "faith lunch." I like that. Guy and probably several others would be horrified at this, but I liked that the food was set out in the hall, and then people either stayed in the hall or came back into the sanctuary to eat. They moved the chairs into circles for conversation and ate lunch. Yes, there was a big coffee stain on the carpet where one woman had spilled some once, but it was about the fellowship not the furnishings, which seemed essentially right to me. The earliest church worshiped with a meal, so why not?

I wore one of John's robes...it was royal blue, with a hood. It had no zipper or buttons, went over my head and then cinched at the waist with a black cord. Very different. But it had a pocket, which was good, as it gave me a place to put the battery pack for the lapel microphone.

People were responsive to the service and were very kind. I preached the Going Out Of Your Mind sermon and one woman in the congregation knew the answer to Life the Universe and Everything. I only mentioned the book and "42" came ringing out of the back. So I am among friends. Of course my buddies from last week, Ernest and George were there helping out. Great guys, who kept insisting that my blunders were of no consequence. I don't honestly know if I kept them overtime or not...there is no clock in the sanctuary...or if there is, I didn't see it.

Well, it's a beautiful day outside, so I'm going to go enjoy it before it gets much later. The grounds of Stirling University are lovely...lots of ducks and swans, rabbits and squirrels. I'll take some pictures and post them tomorrow. My system now is that I load the pictures into the computer at the house, rotate them there, burn them onto a CD and then bring the CD here to put them up. That means I will go through many more CD's than I brought, but I can consolidate when I get home, or before I leave. I do seem to have some sideways movies, however, and I can't seem to find a way to rotate them. So, if any of you computer sorts have clues on how to rotate a vertical mpeg, let me know.