My apologies for the delay in a new entry! I'm writing on Sunday evening and for the first time the office is not deserted. Apparently there is a summer session class that is meeting in the big room that adjoins the smaller office in the Chaplaincy Dept. It will be meeting during the day for the next couple of weeks.

Yesterday was a day for being social and for exercise. There were eight of us that headed out for a walk along some of the coastal towns in the county of Fife. We began at a castle ruin in the town of St. Monan's. 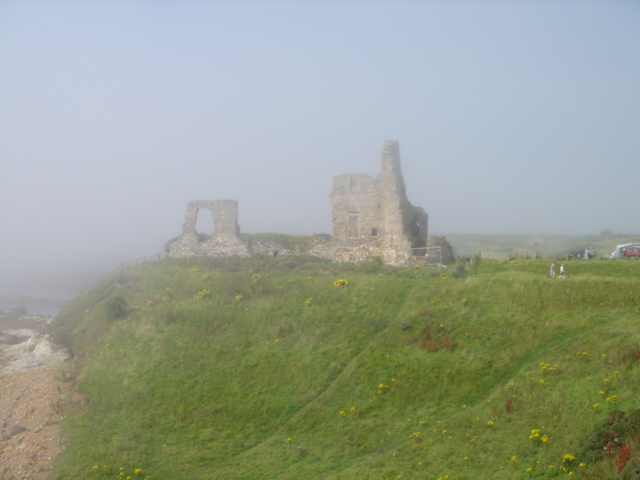 Nobody's done anything with this ruin, other than to fence it off and warn people that they cross the fence at their peril. As you can see, the day was foggy, but I'm told that the Eastern coast of Scotland is like this...fog and sun, alternating without any particular reason, but seeming to prefer the fog to the sun.

Just behind where I stood to take the picture above was a mysterious structure. 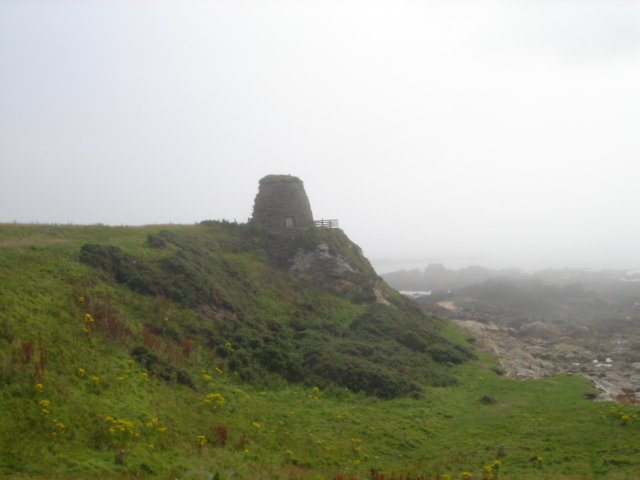 We debated about what this might have been (no signs). Battlements for the castle? A dwelling? A lighthouse?

The coast here looks much like the coast of Maine...mostly rocks, little sand. It was low tide. 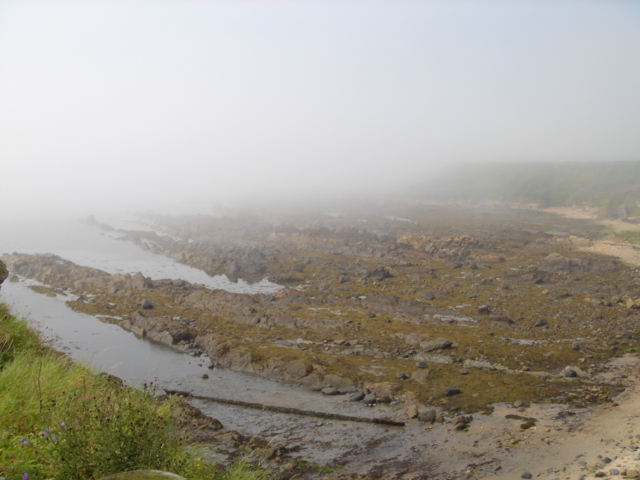 All along it did seem to be divided into these furrows...almost as if the coast had been ploughed. For Barbara, I took this... 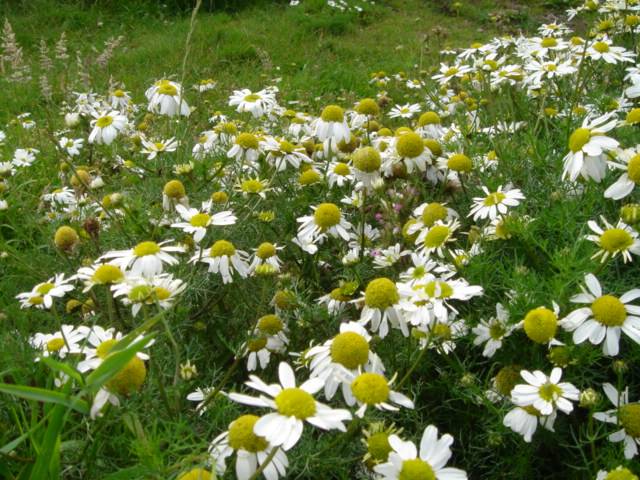 And because it's Scotland's national flower, I took this shot of the thistle. 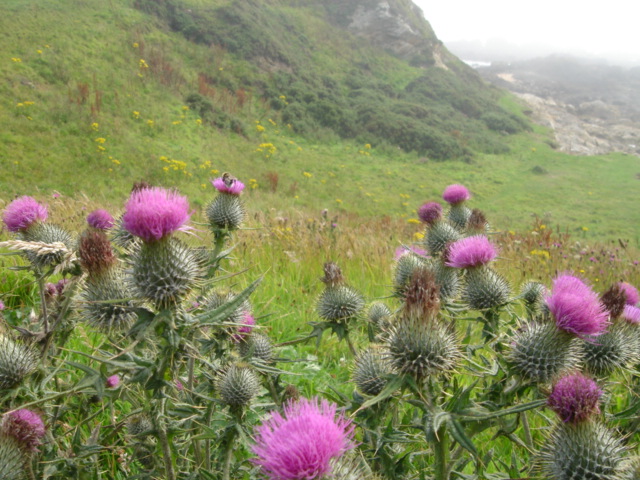 From the ruined castle, we moved to St. Monan's church. 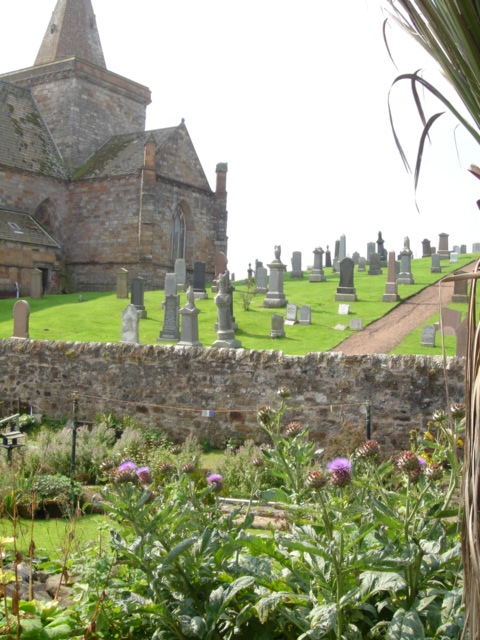 but we couldn't go inside because they were preparing for a wedding. I just don't understand why we wouldn't have been an asset to anyone's wedding decor.

In this same garden as the foreground above, I discovered that Scotland is tropical. 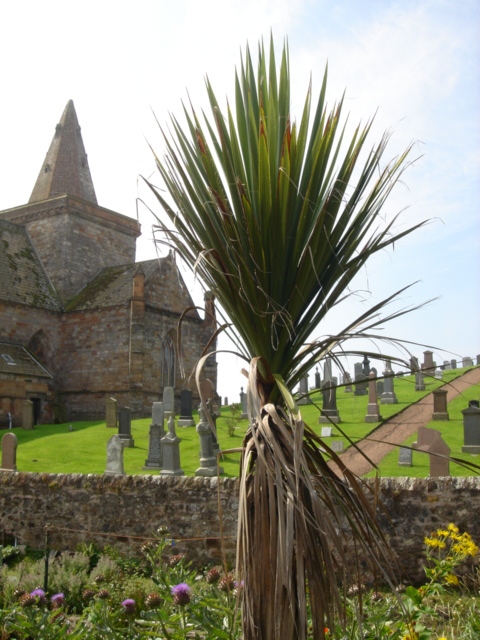 I honestly never expected to see a Palm tree in Scotland! After this amazing sight, we headed out on the walk. This is the town of St. Monan's. 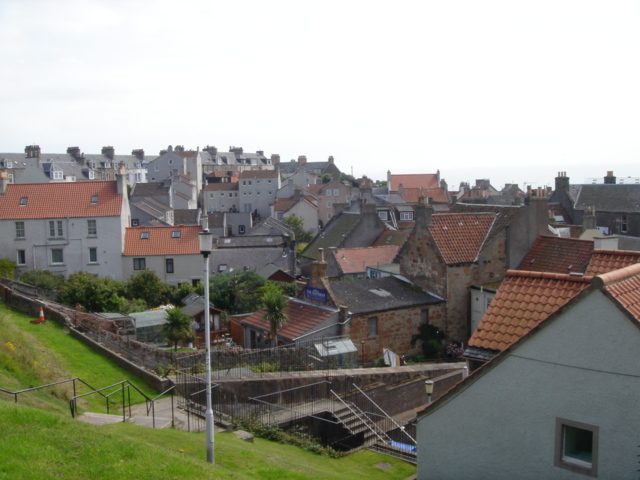 The towns here on the East Coast have a different look to them. There is less stone and more plaster (even though the plaster may be over stone) giving the towns and streets a much lighter look. Streets of solid dark stone can look pretty dreary, even on a sunny day!

As we walked along the coastline, suddenly we came on the answer to the mysterious building back by the ruined castle. 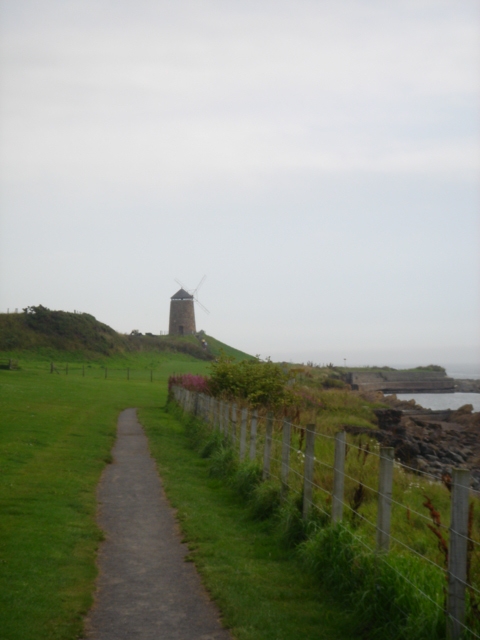 It was a windmill! Apparently this part of the country was heavily settled by the Dutch, and the windmill is one piece of that influence. This one was reconstructed in the 90's from a ruin like that back near the castle. We were able to go inside and climb to the top, getting a lovely view.

The purpose of this particular windmill was to power the St. Monan's saltpans, a significant industry in the area. Here is information on the industry. 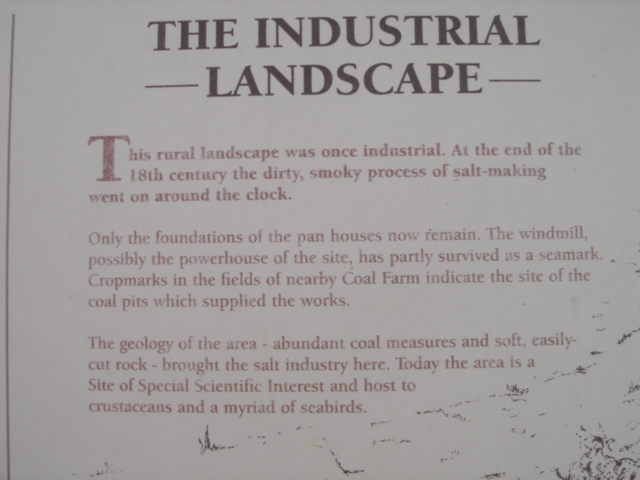 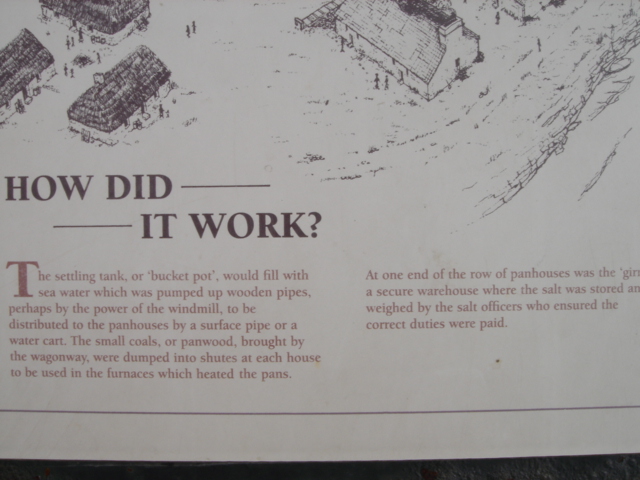 Here are the remains of the pan houses. 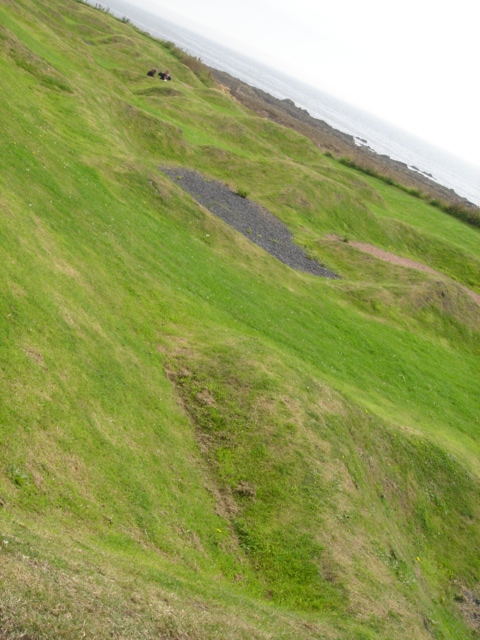 No matter which way I turned this picture it was looking off to me, but I'm not sure it's turned right even now. In any case you can see all the indentations where the pan houses were. One still remains a ruin. 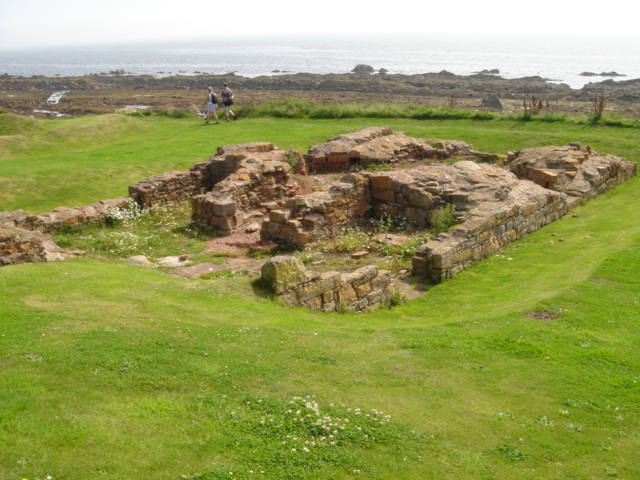 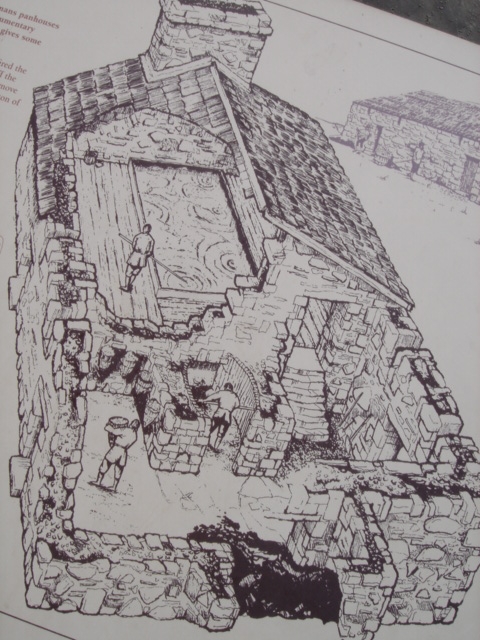 And here's how it worked. 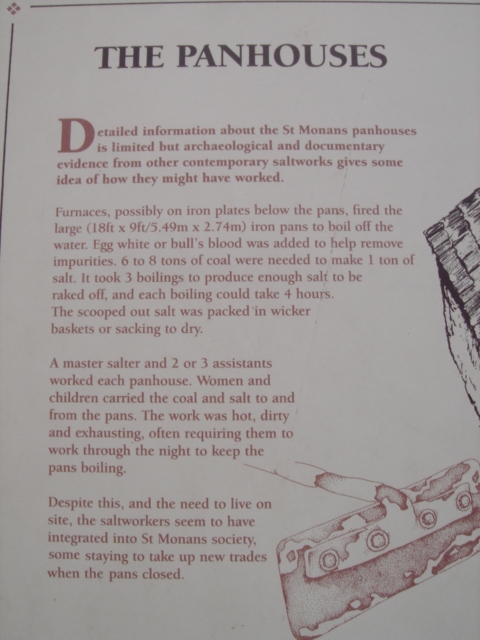 After taking in the windmill, we paused to get a group picture. 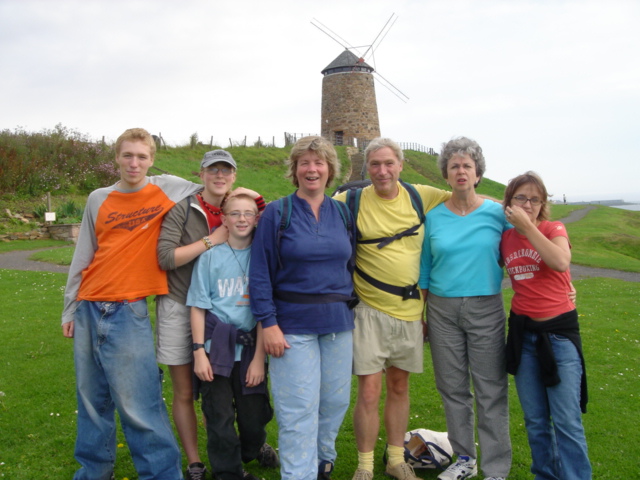 I am, of course, taking the picture. For the most part, this is the Cameron/Kape family, who had me over for tea a few days back. In the center in blue is Lois with her husband John beside her. On the left end are there three children. Joe (on the end), then Ruth, then Douglas. On the far right is Joe's girlfriend, Lauren, who is the one from Manassas, VA who will be returning to the States on my flight. Next to her is Martha, who was Joe's host mother when he came to the US on an exchange. Martha was not as confused as she looks in this picture!

And here is the cow of the day. 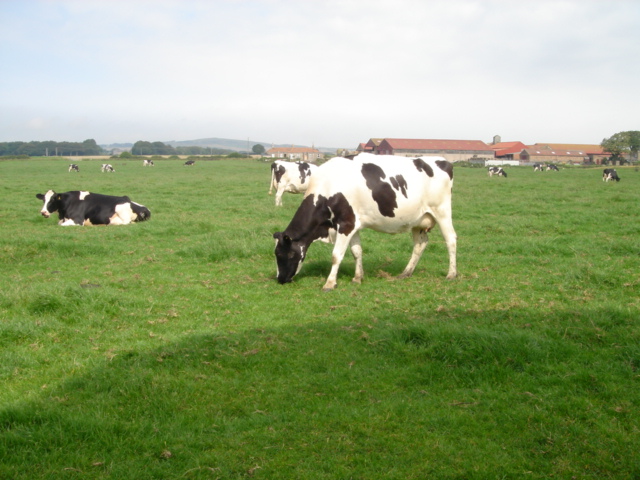 Not remarkable, really...but I like cows.
We continued with the walk. 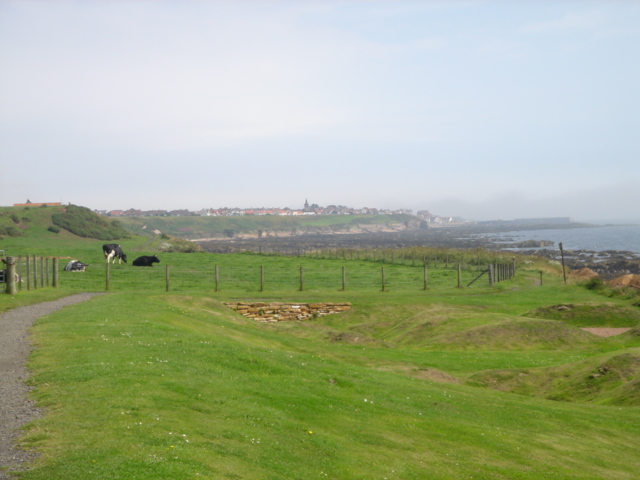 That town in the distance is Pittenweem (hear the Dutch influence).
Before getting there, we stopped for lunch in front of a swimming pool, built into the coastline. 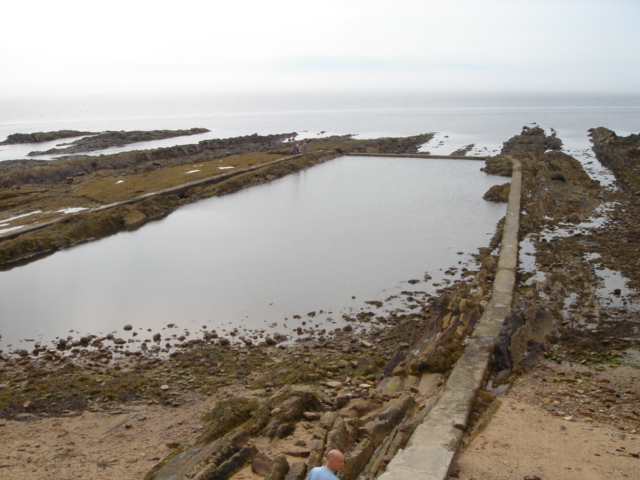 Neat idea, I thought.
And then it was on to Pittenweem. 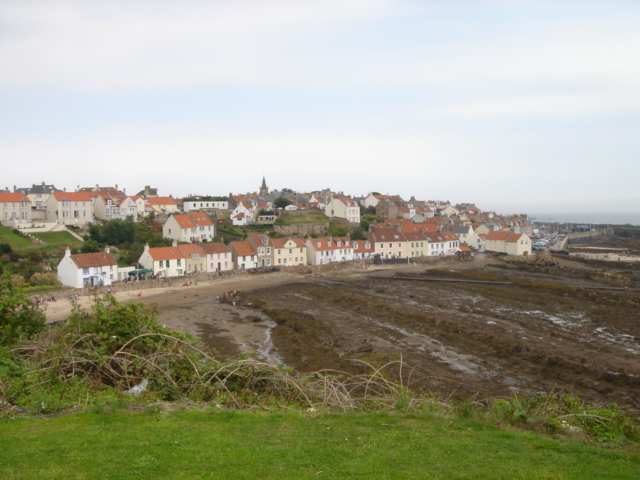 Remember, it's low tide...
It was also the day of the Pittenweem art festival. As we walked through the town we stopped to see many of the displays. We also discovered that there was an art contest going on. It was about 2:30 when we got here and the artists had been let loose at 9:30 that morning, instructed to come back with a finished work of art by 3 pm. This is Margaret Duff painting Pittenweem. We vote for her. 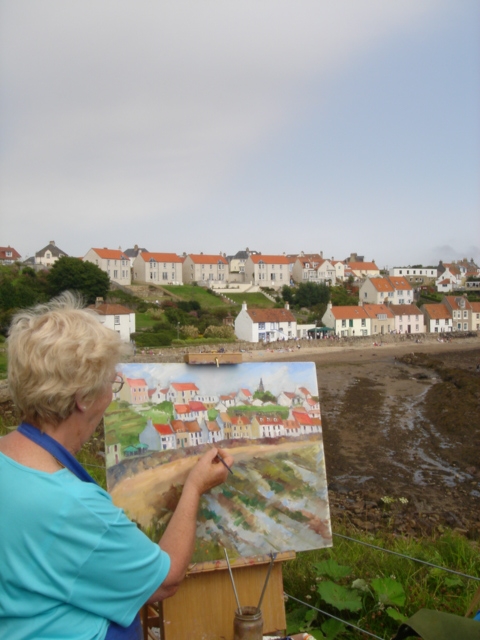 Also in Pittenweem we saw signs to St. Fillan's cave. You will remember St. Fillan from his healing rocks, which I found up in the town of Killen...quite far from here. I have no clue why his cave is all the way over here. Maybe it was his vacation cave. We got up to it and couldn't go in...it is only open by appointment. Oddly, the cave is in the middle of town. This is me by the entrance...a lovely shell mosaic on the side. 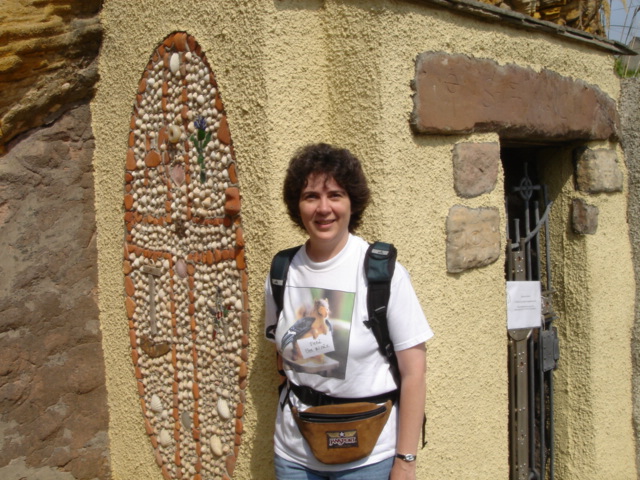 And that's the last picture I took. We ended in the next town up, which wasn't nearly as pretty on the approach and was socked in with fog by the time of our arrival. It began with A and was hard to pronounce. I don't have a map over here to tell you where it was, but it was somewhere around 5 miles from where we started. One of the cars had been parked in the mysterious A town, so we piled in to take Martha to the hotel where she was staying in St. Andrew's.

Yes, THE St. Andrews, of golf fame, and more recently of University fame. Of course the University at St. Andrews is quite old, but it is only recently that Prince William decided to attend here. I would expect that female enrollement has increased.

We arrived and parked near the Old Course. "I need to get a picture of that," I thought, but decided to do so after we had been in to the pub where Martha and her husband treated us to drinks. By the time we came out, you couldn't see the course for the fog. I will draw the scene for you:


Yes, that's what it looked like...the above white space is what you would have seen in a picture. I toyed with the idea of simply taking one picture of the fog and claiming it was all sorts of things, but decided against it. Since I am not a golfer and am far too old for Prince William, I probably will not head back to St. Andrew's. So you will have to trust me that I laid eyes on the Old Course. If you really must see it, you can probably find a picture on the web!

After leaving St. Andrew's, we went back to Lois and John's home for dinner. John and Joe are quite interested in the philosophical side of life, so we had some very interesting discussion. Good to keep the old brain oiled!

This morning was week two of preaching at Stirling, and we had quite a crowd. There was a baptism, and as this is the first one in recent memory, everybody turned out. Bill Seymour, the retired minister who preceded John, conducted that part of the ceremony. It was much longer than our ceremony normally is (not longer than what's in the hymnal, just longer than what I usually use). They don't have a paschal candle, but they did light a small taper, which was given to the mother. The nice piece was, the candle was presented to this newest member of the church by the oldest member...not oldest in age, but the one who had been a member the longest. That was a nice touch, I thought.

Lots of other babies turned out for the baptism as well, and it was a bit noisy during sermon time, but all went well.

After lunch, Mrs. Butterfield and I went to the home of Bill and Elizabeth for lunch. Elizabeth was the person who played the piano last week (someone else is these next two weeks). The day was nice, so we had a barbeque. I don't know that I've ever seen so much meat at a single meal. Steak AND chicken AND sausage, with salad and a wonderful dessert with a mix of every red fruit there is topped with a meringue and served warm. Bill encouraged us to be lavish with our praise so Elizabeth would make it again sometime...but we didn't need the encouragement.

We got back to the house about 3 pm, at which time I realized I needed to do laundry. With a sunny, windy day, it was perfect for hanging things out. I am here at the University praying that the weather doesn't suddenly turn, as it is all still out on the line.

Tomorrow evening another couple from the church has invited me for dinner, but I don't know yet what the day will hold. This afternoon I finished the first edit for my book and will e-mail that back to the publisher shortly. I'll keep you posted!