"No need to take a raincoat," the book said. "The light Scottish mist is well covered with a small umbrella." I'm glad I ignored the suggestion. It has been pouring buckets the last two days, so my carefully laid plans were altered. When I awoke to a downpour yesterday, I decided it was time to head north to the Robertson Clan museum.

Actually our Clan name is Clan Donnachaidh (pronounced Donnachee), the sons of Duncan. The Robertson was added when the ancestor of the Robertson line (one Grizzled Robert) captured the foul perpetrator of the murder of James I. As a reward, the new king granted him this coat of arms.

The Latin phrase at the top means, "Glory is the reward of valor." The Gaelic phrase at the bottom means "fierce when roused." The serpent and dove represent the family line that goes back to the family of St. Columba, and the man in chains at the bottom represents the captured murderer. There are too many theories about the three wolves on the shield for anything to be certain.

And here's our tartan...first in red, then the hunting tartan. 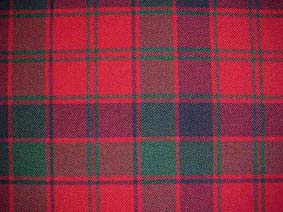 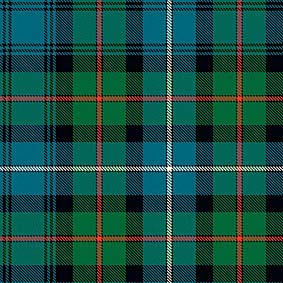 The drive took close to two hours in the pouring rain, with one part of the road so deeply covered in water that I feared I wouldn't get across. I decided then that I would return home by the highway rather than the back roads. I'm sure that one place was impassable by the time of my return.

The Clan Museum is being moved, and thus was closed. I was quite sad about that. But the Clan Museum shop was open and I had a nice chat with the proprietor, who is also an officer in the Clan Donnachaidh Society. I joined the latter and picked up a sheet that has a driving tour of the Robertson lands (which the Clan Museum and Shop is on). I plan to go back and do that when the weather breaks.

After my visit there, I went down the road a bit to Blair Castle. 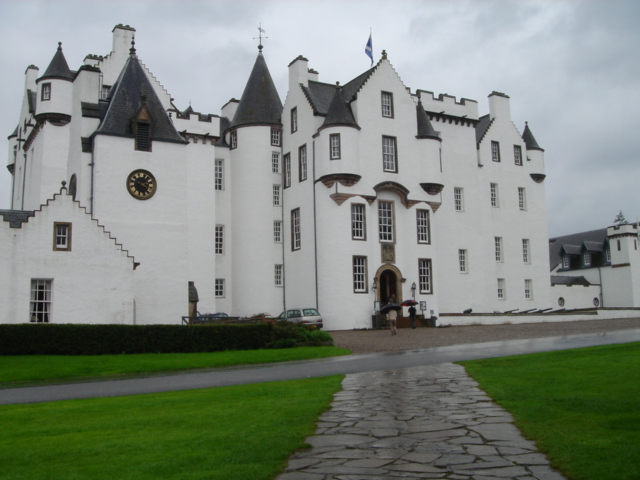 As you can see, this one's in great shape...of a later vintage than many...and is still lived in at times. This was the home of the Dukes of Atholl and is the place where the Robertsons owe their allegiance. Unfortunately, the several Dukes of Atholl liked to shoot things. Here's a hallway. 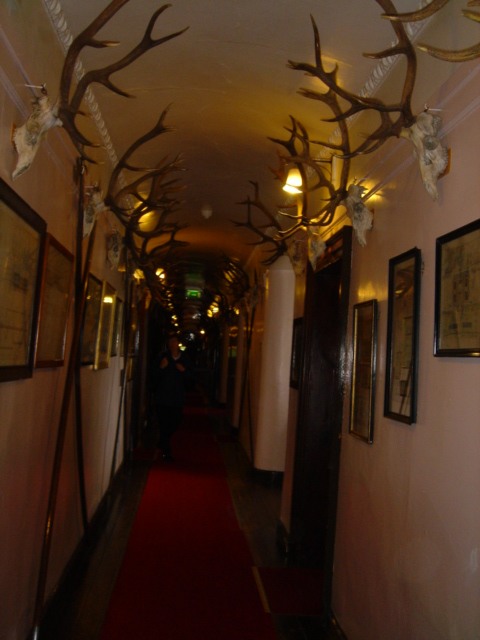 After taking this, I realized I wasn't supposed to be taking pictures. So you don't get to see some of the amazing paintings and furniture throughout the castle. One four-poster bed, decked in red brocade with vases of ostrich plumes atop each post was truly over-the-top.
I came back outside and headed through the rain to the car. I stopped for this...in the middle of the parking lot. 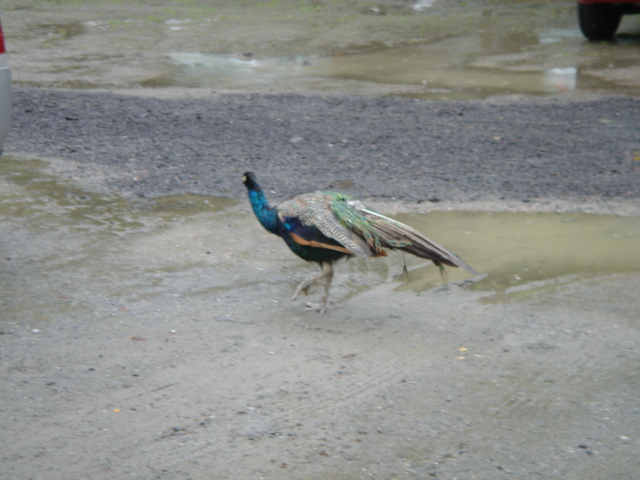 This is the sheep of the day. The rare Highland Peacock Sheep.
I got back to the house in time to be picked up by Douglas and Allison...another couple from the church. Douglas picked me up on the way home from work, and I had a lovely meal and visit in their Stirling home. I got back after 10 pm, so I didn't come back to the University to do any blogging.

The weather forecast for today was not much better than yesterday, so I decided last night that today I would take the train down to Edinburgh and check out the Reigster House where I could do some geneaology research. Sounded like a good, indoor activity. I walked down to the closest bus stop (about a mile) and caught a bus to the Stirling train station. From there I headed to Edinburgh.

Here's what the castle in Edinburgh looked like today:


I'll go back when it's nicer. I noticed that there was a bright red bus, identical to the one I rode around on in Stirling only this one advertised (surprise, surprise) Edinburgh tours. So I'll probably do that some day. For this day, I travelled Princess Street. It took me awhile to find my way out of the train station, and on my way out, I picked up a city map. I pulled it out and looked for the Register House. It was at the other end of the street, which was a good ways, so I set out. Most of the street runs along the castle grounds on one side and shops on the other.

Since the Edinburgh Festival is going on, there were lots of different things happening. See anything odd here? 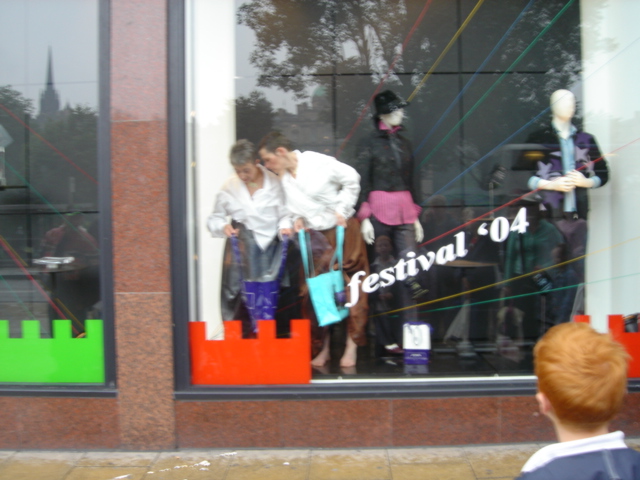 Yes, those are two real women in that store window, next to the not so real ones. I don't know how long they went on, but they were doing some sort of performance art in the window. Very slowly they looked in each others bags, held them out, looked up, looked down, etc. Quite odd.

At last I found my way down to the Register House. I went in, only to be told that this was the West Register House. I wanted the other one...which, of course, was at the opposite end of the Royal Mile. I had practically stepped on it on my way out of the train station. But now it was a mile away. So back I went.

At about 10 til, we were given numbers according to where we were in line, and herded into a waiting room. I refrained from saying "moo." There we filled out a form. At 1:00 the cattle drovers moved us to waiting room #2, where we waited for our number to be called. As our number was called we went into another registration room where we paid our money and given a computer table assignment. I indicated it was my first time there and the nice woman at the registry said she would come and check on me when everyone had been checked in. It looked like everyone today had a space. They don't always, and sometimes you wait for nothing.

I began hunting on the computer records, and soon the woman came by as promised. She looked at the paperwork I had brought with me. "Where's that from?" she asked. I told her it was the stuff I had gotten from the Mormon site. "Oh," she said. "If you have that, you won't find anything new here. They have all our records in their data base!" She kindly offered me a refund, which I accepted.

In my strolls down Princess Street, I had discovered that there was a Titian exhibit at the museum, so I decided to go do that, since it was (of course) still raining. In the square next to the museum there were some hardy souls gathered outdoors watching something.

Here he is up close. He's on a unicycle. 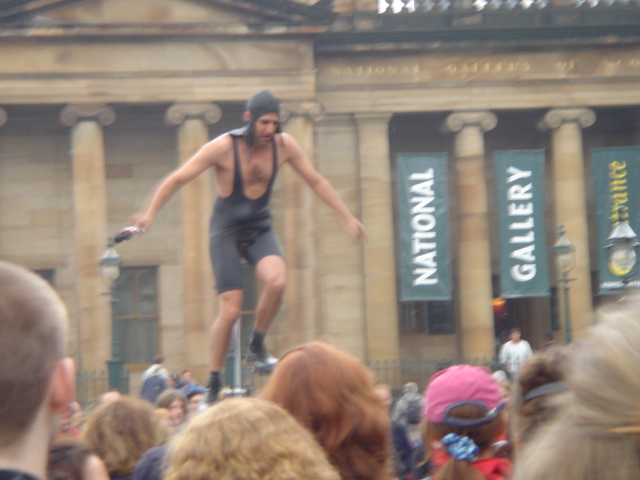 Another man was doing a carving in another part of the square, and by the time I came out, the unicyclist had been replaced by someone doing balloon art. The exhibit was called "The Age Of Titian: Venetian Renaissance Art from Scottish Collections" and it was quite something. Several paintings from private collections were one display for the very first time. I suppose it's heresy, but I tended to like Paris Bordon's work better than Titian.

After the exhibit, I wandered back to the train station, weaving my way through some shops on the way. The train coming home was packed. I got back to Stirling about 5:30 pm and headed for the bus stop. After a bit a bus came by that said he was going where I was going. So I got on.

I am not adept at public transport. Apparently, when I wanted to get off, I was supposed to press the red "stop" button. I thought he would just stop at each bus stop. So...we sailed right past my stop, and I thought maybe he was coming back through after the stop at the University...since technically the stop where I had boarded was across the street. Finally he had ended his run, and there I was...the only one left on the bus, looking dumb. He had to head back to downtown Stirling, but he dropped me at another bus stop and gave me a transfer ticket. The next bus didn't have red buttons, but you can be sure I got off at my stop! From there I stopped at a convenience store to pick up a couple of things for supper and then carried them (in the rain) the mile back to the house.

I'm told this blog is getting long, but it's quite a process to get another one set up, so you may have to put up with another day or so until I can get some time to set it up.
- posted by Anne Robertson @ 9:10 PM