Well, here's hoping that today's post doesn't mess up yesterday's. If it does, Blogger.com will hear from me.

I set out this morning with a bad attitude. After posting last night and discovering the mess ups, I then went and checked the weather. The forecast in any part of Scotland I was still interested in visiting was rain and thunderstorms. All week. This is my last week with a car, so I was very distressed.

I woke up this morning to...you guessed it...rain. I had mapped out a route to the northeast, first stopping in Perth at Scone Palace and then moving Northeast into Pictish country to a large Pict museum in a town called Brechin, quite a distance out. So, grumbling about the rain, I set out for Scone Palace. I have skirted the town of Perth several times, heading north on the A9, and each time I wondered how I would get to the Palace, since it seemed to be on a road on the other side of town that looked hard to get to. I don't like city driving. I like driving in strange cities even less. Driving in strange cities on the other side of the road without anyone to help navigate comes in at the bottom of my list. But I wanted to see the Palace...so I boldly headed for Perth.

At the first major roundabout, I went around it three full times, trying to determine which road would take me round the city to the other side. I finally just picked one. I was sure I was going north...so, of course, I was going south. Hey, it was raining. Anyway, by the time I found a place where I could pull over and see where I was, I was well out of Perth, headed in the wrong direction. Just as my mood was beginning to sour more, I saw that the direction in which I was headed looked a bit brighter than what was behind me. I looked at the map again.

I'm sure the whole thing is the fault of some golfer who was upset that I was only in St. Andrews in the fog and prayed for another opportunity. I was halfway to St. Andrews. Since the weather looked better that way, I decided to go there. Fortunately, just outside the city is a park and ride with a free bus that takes you to different places of interest around the city. So, I parked easily, hopped on the bus and headed for the St. Andrews Cathedral stop. The rain had stopped. 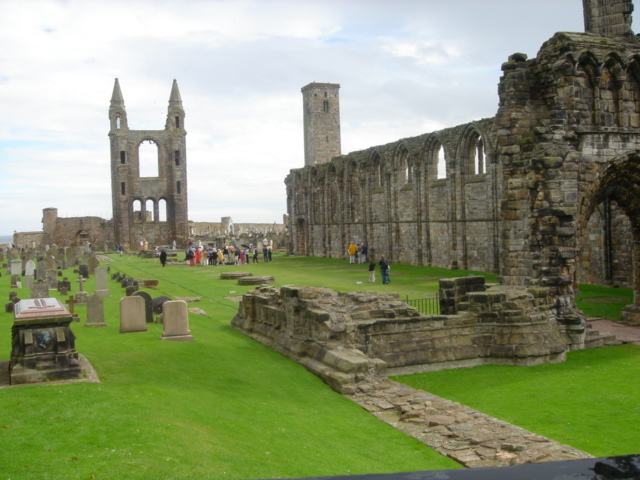 Begun in 1160, St. Andrews Cathedral was once Scotland's largest. Legend says that St. Rule, guardian of St. Andrew's relics, fled Greece to save them. When his ship foundered off the coast of Fife, he brought the bones to St. Andrews. 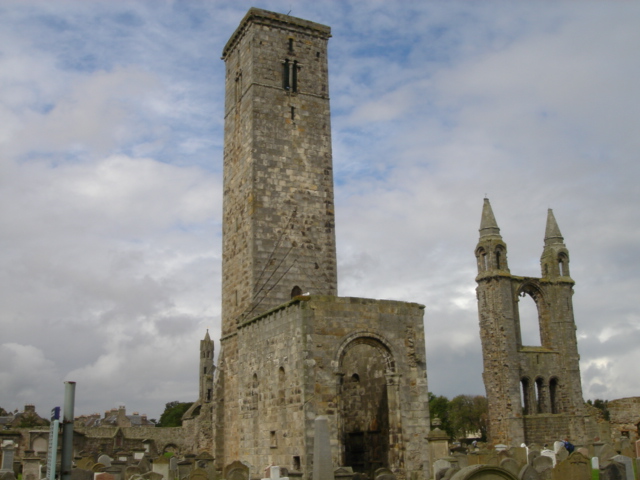 The big square tower and its chancel belonged to St. Rule's Church, built in 1120, before the Cathedral. My admission ticket included a token to climb to the top. The climb came with a warning that the stairs were particularly narrow. Given my reaction to stairs that had no such warning, I decided to forego the tower climb. I'm sure there were lovely views from up there, however, as the Cathedral is right on the ocean. There weren't many Robertsons in this graveyard, but I did find one that could fit in the dates I need. 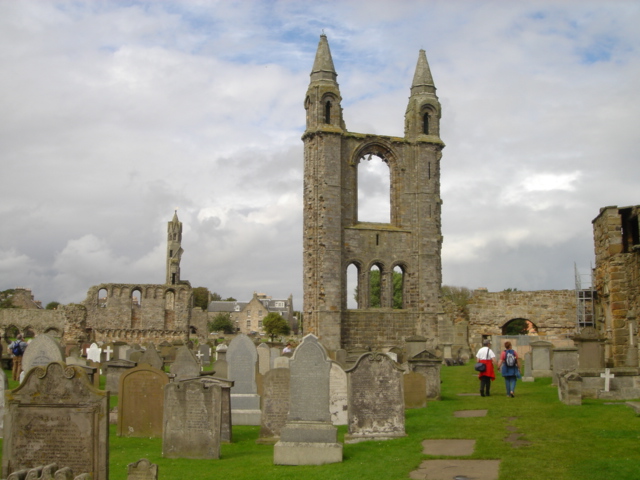 Since I wasn't going to make it out to the Pictish Museum, God nicely provided a collection of Pictish carved stones in the cathedral museum. This was a sacred site for the Picts before the Cathedral was here. The most remarkable piece is an elaborate sarcophagus from about 800AD. 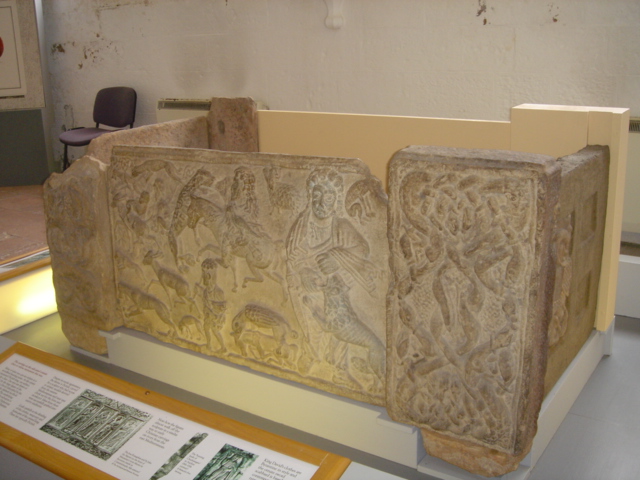 Here is some information about it. 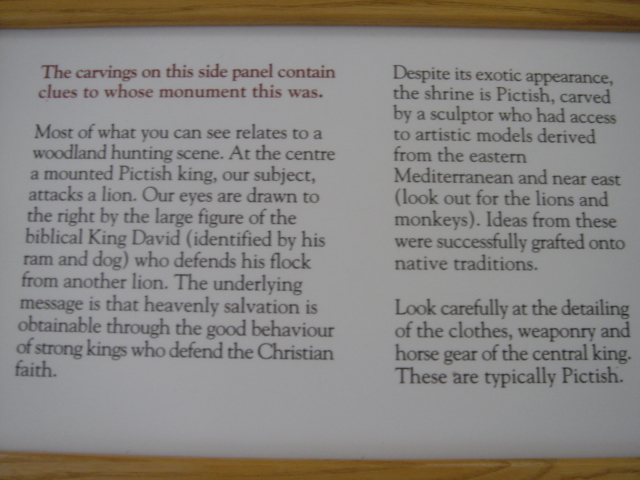 The museum assumes a Pictish King...perhaps Fergus. Others think this housed the relics of St. Andrew. Further in the museum it was quite dingy and dark, and I was quite proud of myself for spotting this: 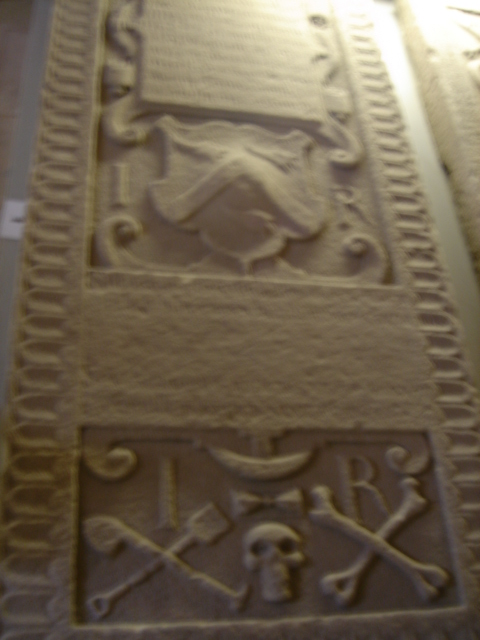 Look closely at that shield in the middle... 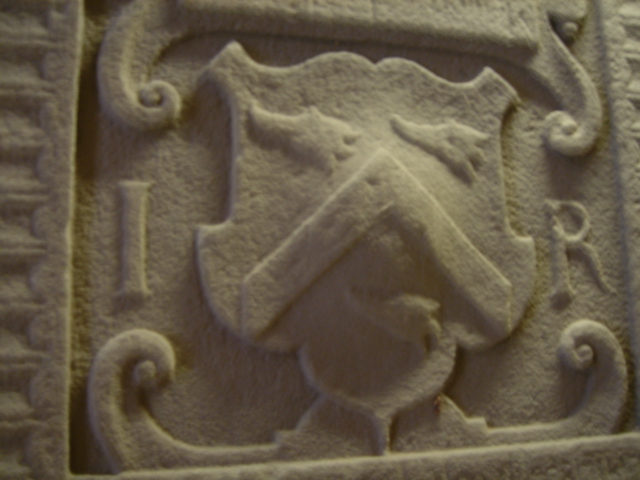 Hmmm...I thought. That looks like three wolf heads. That's a Robertson! Sure enough. Janet Robertson died on Sept. 13, 1644. The arms belong to Master John Robertson, so it was probably his wife. There's a translation of the inscription in a booklet on a stand nearby. So that was cool.

After the museum, I wandered around the corner to St. Andrews Castle. Again, it is ruin, but it must once have also had a lovely view of the ocean. Here's the front tower. 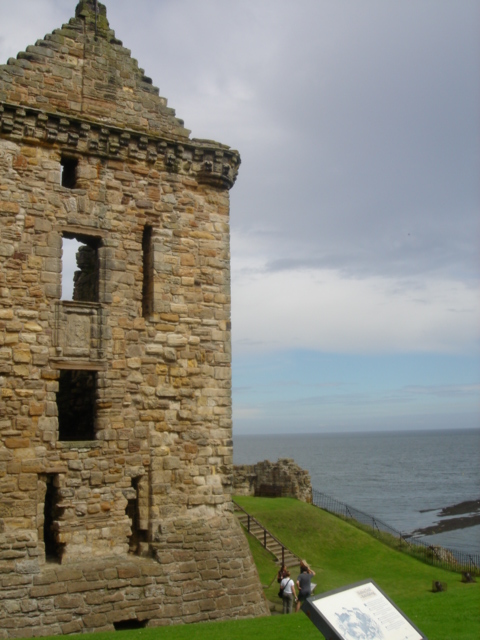 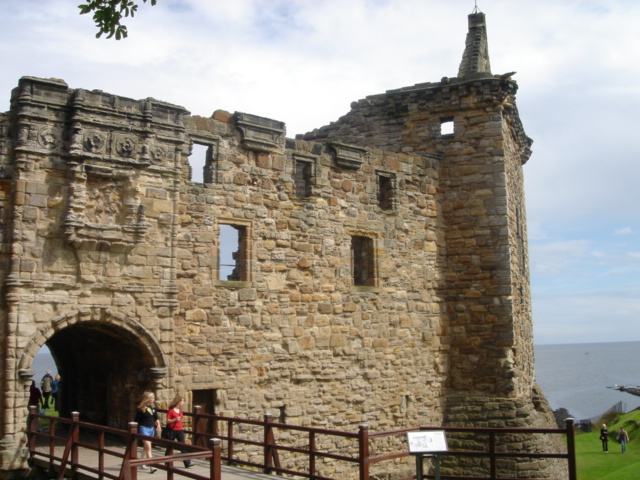 Most of what remains here was constructed between the 1300's and 1571 for people of power in the church. Some parsonage! Here's the view from the courtyard... 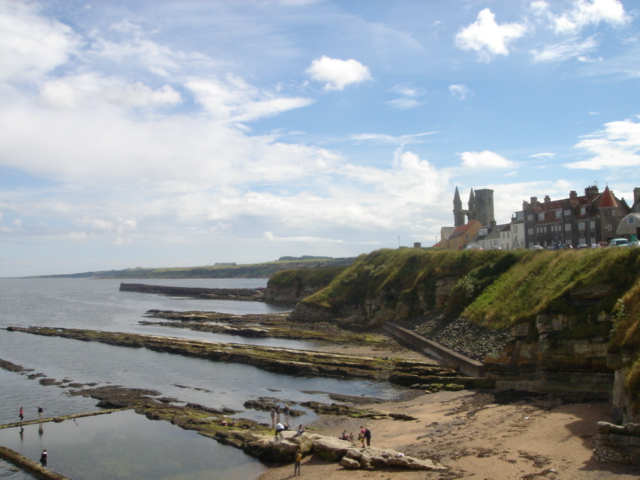 You can see a bit of the Cathedral ruins from here. Anyway, it's no wonder that they didn't take kindly to the Protestant preachers calling for an end to their power. George Wishart was one of those, and Cardinal Beaton took him prisoner here in 1546. It didn't end well. Here's the placard. 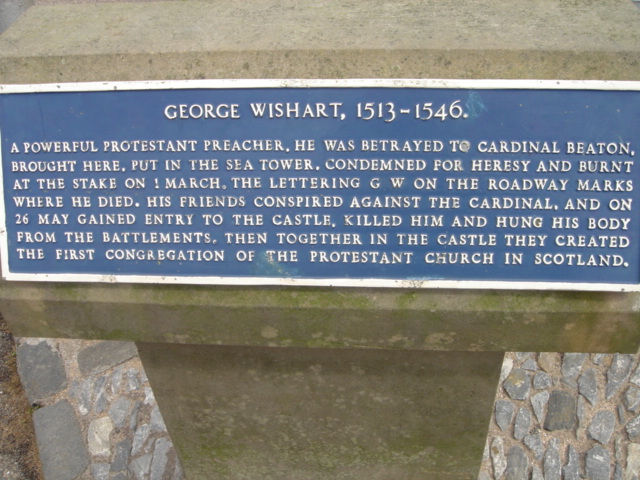 Here's the GW in the road. Someone has parked on it. 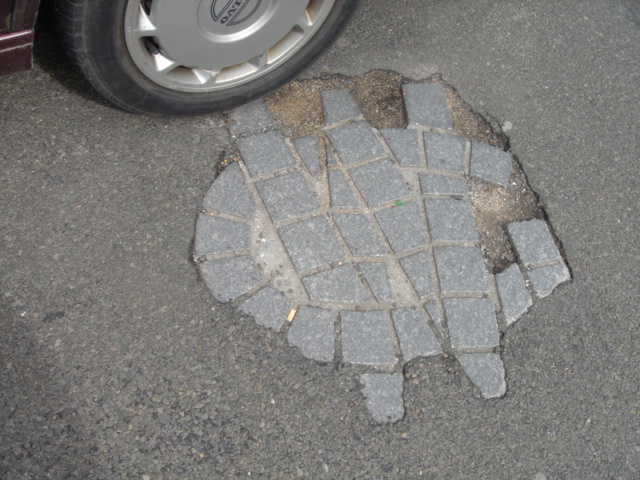 From the castle I walked around to the other side of town, through St. Andrews University (founded 1411...no sign of the Prince) and on to...yes...the golf side. Here it is...the Old Course. A couple of shots for you golfers. 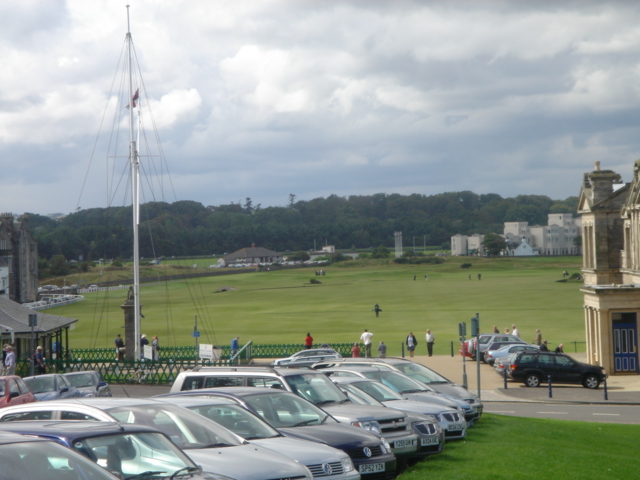 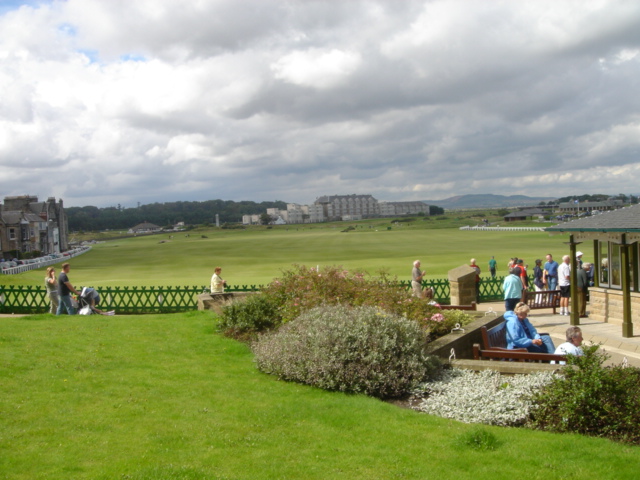 From here I walked through the parts of town I had missed...mainly shopping areas. I finally found some rain pants, which I was told I needed for Iona, but which I hadn't gotten before leaving the States.

The day was quite lovely by then...once again Fife had come through. But I figured it was time to catch the bus back to parking and see if I could have another run at getting to Scone Palace. I guess people coming to Perth from the South want to visit Scone Palace more than those coming from the West, as it was very well marked from this direction, even though still somewhat complicated. I made it to the gates about 4:45, one hour before closing. 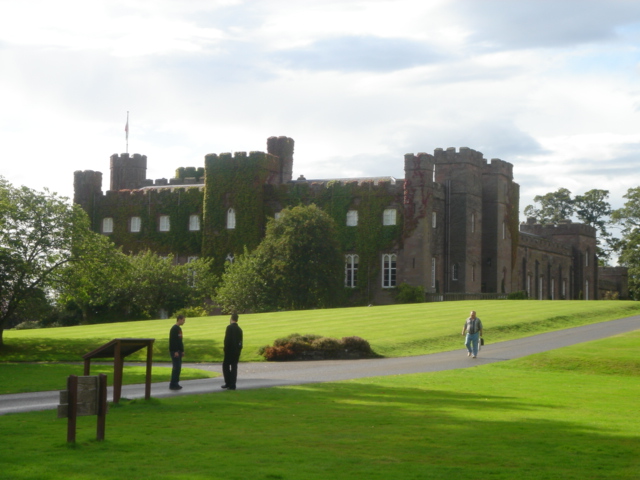 I was interested in the Palace because this is where Kings were crowned once they moved from Dunadd (we were there, remember the foot?). Of course you couldn't take pictures on the inside, but I have to say I was disappointed. Part of the Palace is still lived in by the Earls of Mansfield, and the rest is an incredible art museum...porcelains, paintings, Victorian furniture, etc. Trouble is, I don't really care for the Victorian age much. I came here because of the ancient Kings and to see the last coronation place where we could be sure that the Stone of Destiny...sometimes called the Stone of Scone...resided. Well, except for a little room at the end with some replicas of the Scottish Regalia, there is hardly a mention of the important part of the history. There is one corridor that has some placards about the kings crowned here, including old R the B. But most of it is a tribute to the Mansfields and the things brought here for Queen Victoria's visit. So, if you're into Victorian stuff, don't pass this up. If you like the older things, like me, it's not a priority. I should have taken the hint when it wasn't listed in my "In Search Of Ancient Scotland" travel book.

There was one placard on the Stone, which also alludes to the question of whether what Edward stole was the true stone. That stone doesn't match early descriptions. The Abbot here at Scone had a good many months of warning that Edward was coming, so some think that he had a fake stone made and hid the real one. Trouble is, he died without sharing the information. Myself, I think it's here, under this Mercat Cross on the grounds. 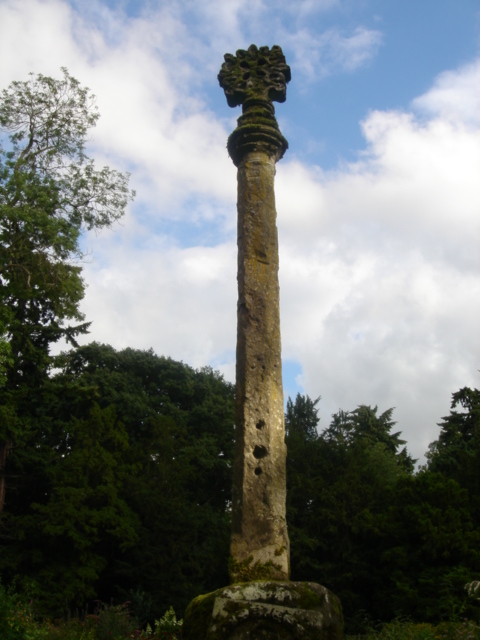 Some of you have written to question the authenticity of yesterday's World Famous Tartan Sheep. Such unbelievers. For you doubters, here is the sheep of the day for today. 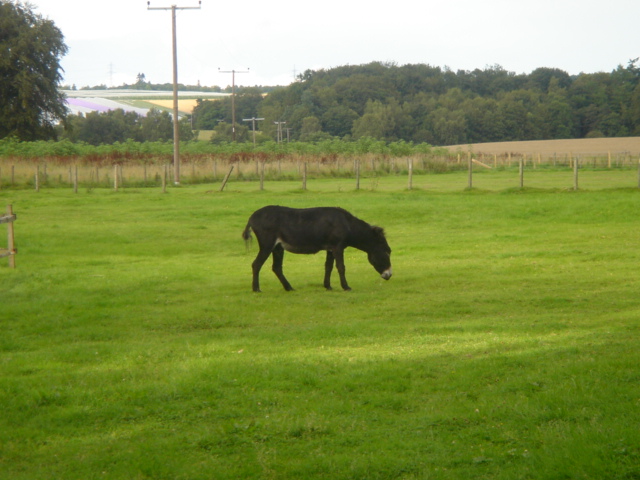 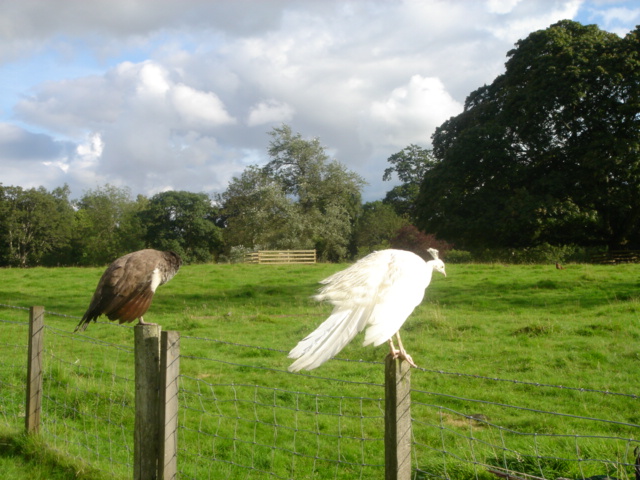 Now to load this thing and see if it works properly.