Today was a relatively long day...my last day with a car. Tomorrow morning it goes back to Alamo rental, none the worse for wear, except that the brake pedal sounds like a bird chirping.

As I indicated the other day, with only one day to go, I decided I really didn't have that much interest in doing the sights in Edinburgh. Especially since it was going to be raining again, which it was. I seem to have been on a Robert The Bruce pilgrimage of sorts, and it just wasn't complete without Melrose Abbey, the burial place of his heart.

The town of Melrose is in the part of Scotland known as The Borders...meaning the border towns between England and Scotland. They were brutalized for a long period of time as the national borders went up and down, up and down...burning the towns over and over again each time the other country (England or Scotland) took it back. Melrose is below Edinburgh, but further than Roslin by a good bit.

The sun was actually shining when I left Stirling this morning, but the rain had settled in by the time I was rounding Edinburgh. Sir Walter Scott wrote about Melrose Abbey as well as the other abbeys in the Borders. His comment was that it was best seen by moonlight, so maybe a gray, rainy day wasn't that far off. Here is the abbey from the churchyard. 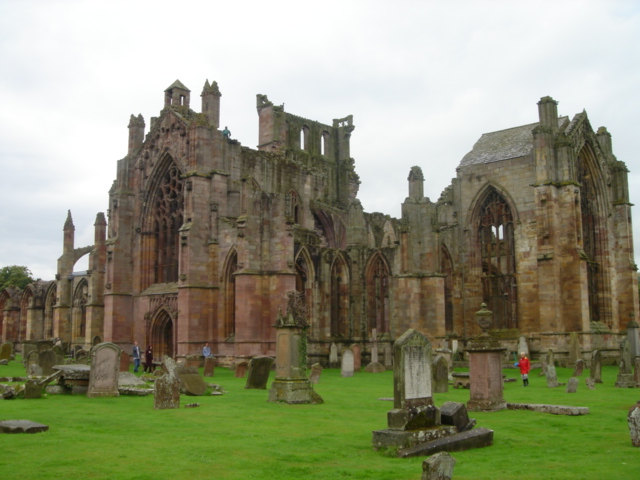 You've seen a lot of abbeys, and at each one I am frustrated that I can't seem to capture the enormity of the architecture in these places. Look at the size of the people above, as compared to the building. This is looking up from inside...if you can call something without a roof "inside." 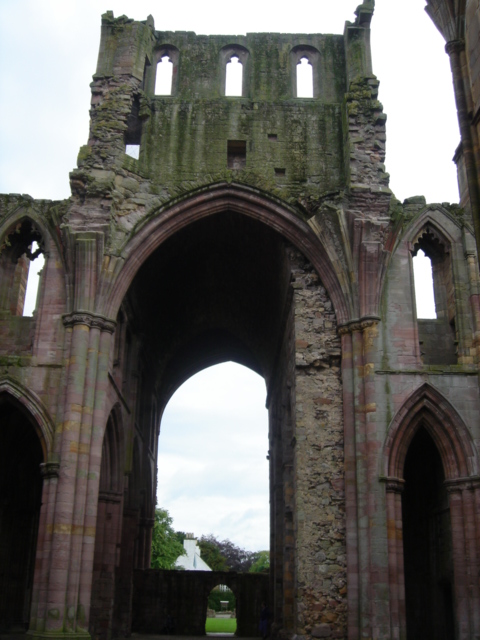 It's just very, very big. This abbey was a Cistercian monastery...plainer than some of the others. But it was here that Robert the Bruce asked his friend James Douglas to bury his heart, once he had returned from the Holy Land. Douglas himself did not return...he was killed over there. But another did return the heart to its desired home. I guess it was not uncommon to bury hearts separate from bodies. 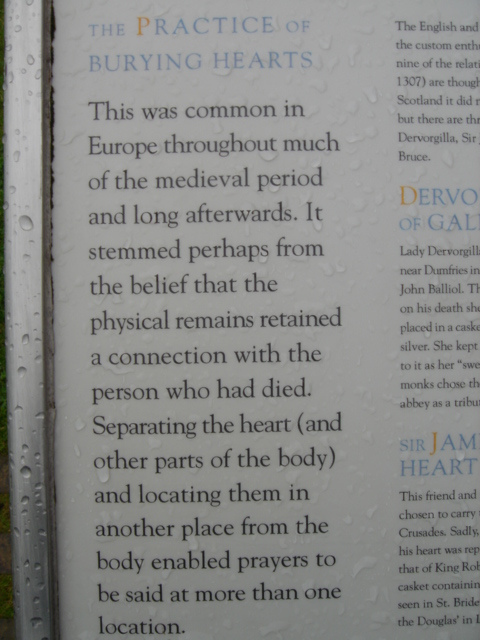 This tells about the discovery of this particular heart. 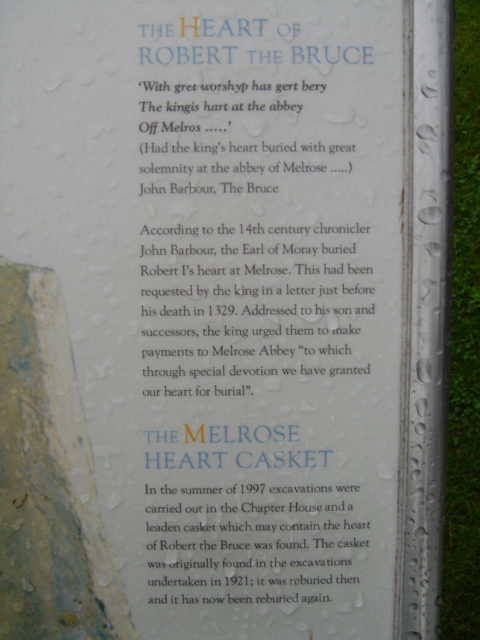 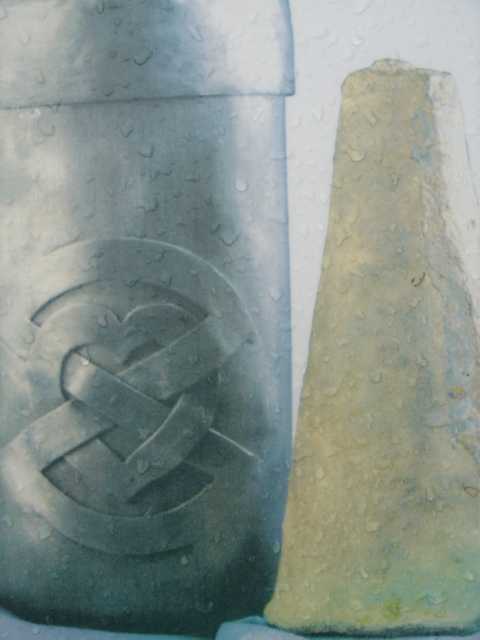 Remember that his body is in that ornate red and gold tomb underneath the pulpit in Dunfermline Abbey. His heart was located in the Chapter House...the meeting room for the monks. Here is what it looks like. There was a bird feather right next to it, which I kept. 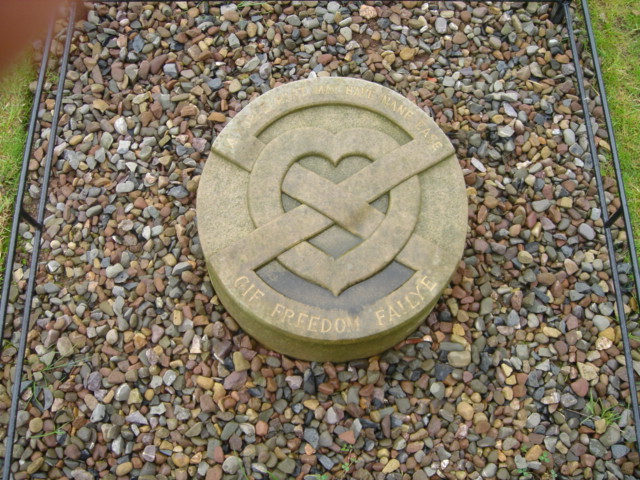 His name isn't even there. Here's the setting. 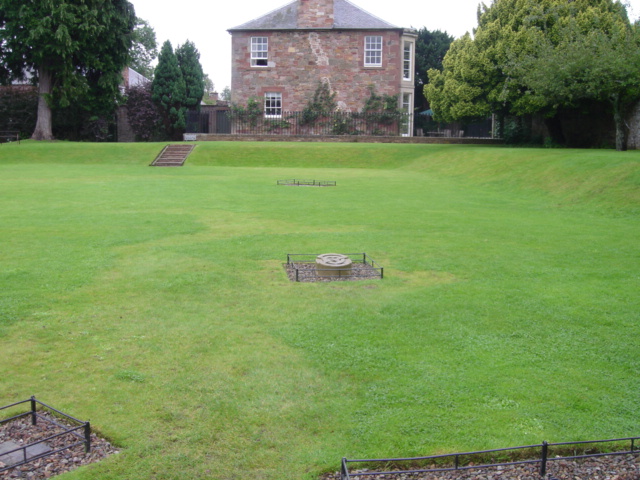 Here is some carving on the outside of the abbey. 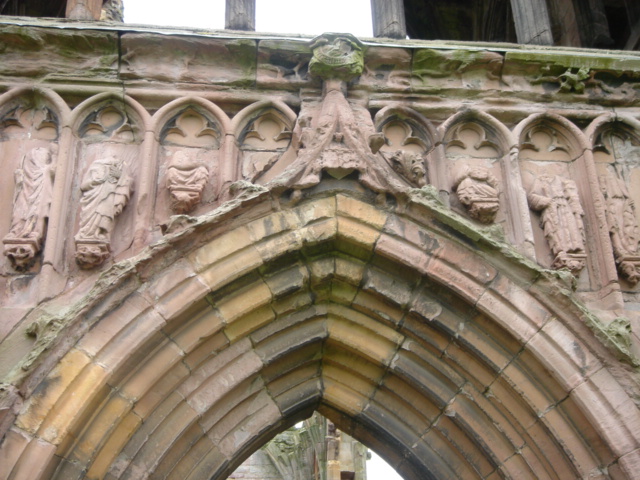 Notice anything? Every blessed statue is headless. Defaced (yet again) during the Scottish Reformation. Like at Rosslyn and a million other places, there are places for statues where statues are not. Destroyed by over-zealous icon-smashers. The line from "Where Have All The Flowers Gone" comes to mind..."When will we ever learn...when will we ever learn?"

Once I left Melrose, I headed to the opposite side of the southern territories...just under Glasgow...on an adventure. Back when I was looking into my Robertson heritage, I picked up a book on the Robertsons that had been my father's. I think he got it in Nova Scotia. Anyway, when I was looking through that book, an index card fell out. On the card, in his handwriting was an address. 46 Cessnock Ave. Hurlford, Scotland. It had a phone number. Across the top he had written Robertson. At the bottom he had the names of two males: Jim Vose and Tom Bauer.

I had found Hurlford on the map...just a little town outside of Kilmarnock. So I went there, in search of 46 Cessnock Avenue. There are no roads that go directly from East to West, and I took a number of wrong turns through some lovely but very flooded areas. Like up in Aberfeldy, fields were flooded and rivers ran high...and the rain continued to come. But at last...late in the afternoon...I reached Hurlford.

I parked on the main street and started walking. I came to a little church where some people pulled up in a car. I asked for Cessnock Avenue. It was only after I asked and the man began to answer that I noticed his condition. I never asked what had happened but he looked like he had been through a combine or something. He had a massive...very new...stitches still quite visible scar that went up from the middle of his eyebrows for several inches. All around his eyes were bruised and puffy. He couldn't have been too long out of the hospital.

Anyway, he was very kind and pointed me in the general direction. As I got up that way, I found Cessnock...Drive. I wanted Cessnock Avenue. A woman was walking four labrador retrievers, so I figured she was a good one to ask. She led me past Cessnock Drive, down Cessnock Road and finally told me how to get to Cessnock Avenue. I came to #46 and knocked on the door.

So what do you say? Hello, your address is on my index card, why? I said something about as intelligible as that to the older woman who answered the door. I showed her the card and the names on it. "Do you know them?" I asked. "Aye," she said. They were the lads who stayed with me from the band." She invited me in. This is Margaret Robertson. 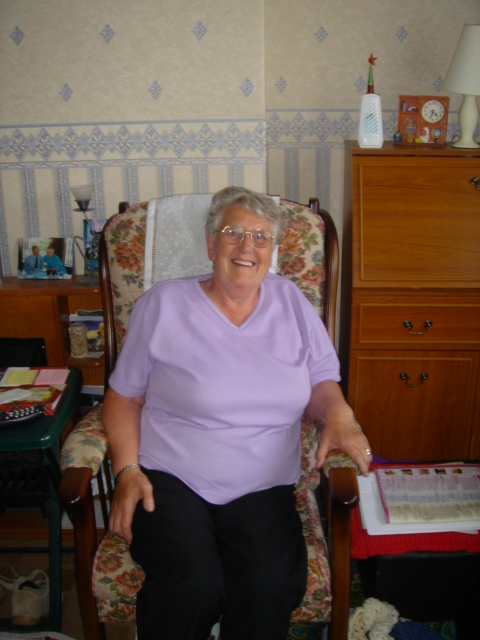 I learned that her husband, Ian, died on May 12, 2004. She has several children. One of them, Alex, visited the USA sometime back in the late 70's. The two men on my card were Americans who were in Scotland on a band exchange, and they stayed with Margaret and Ian. Alex plays the tuba. She showed me some of the things that Alex had brought back from the States...which included something from Cranston East High School (in Rhode Island). That's close to Coventry where I went and where my parents taught. So...we're guessing that when Jim and Tom went back home that they somehow encountered my father. Maybe through the Vocational School, which at least at that time took some kids from other towns. Perhaps one of them said, "Hey, I stayed with a Robertson in Scotland!" and my father saved the information. I don't know that he ever met Alex, since his name wasn't on the card.

This is Margaret's dog, Holly, with a pull toy. I pulled it a lot. 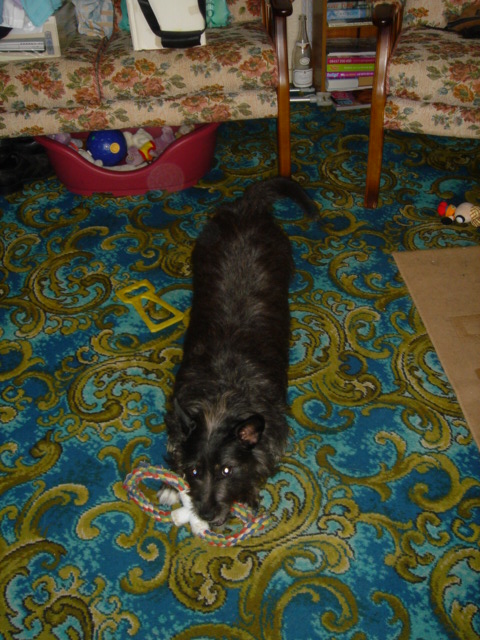 We had a wonderful time, although the visit was short. She looked at my address and was amazed that I lived in Dover, since her maiden name was Dover. I hope to send her something from Dover when I get home.

So that finishes the adventures to date. This will be the last post for a little over a week. Early Saturday morning I take the train to Oban, then catch a ferry to the island of Mull, where I pick up a bus to the other side of the island where I get another ferry to the tiny island of Iona. I will live and work and worship there for a week. You can read more about Iona at www.iona.org.uk.

I hope to post once more after my return (I don't think I'll have internet access on the island, so I won't be able to respond to e-mail either.), although without a car and with the run-up to the fall semester coming fast, access at the University may be limited. So...off I go to the land of St. Columba. In the meantime, I'm praying for some sunshine tomorrow so I can do laundry. Without a dryer, I need a good day to hang out clothes...and I have to pack them by tomorrow night...so think sun.