I'm baaaack! I have far too many pictures for just one entry, so I'll go back and do the Iona experience day by day.

First, the day before leaving...Friday, Aug. 20, when I didn't post an entry. In the morning, I turned in the car, and was pleased to see that nothing unpleasant was awaiting me there. The system for traffic tickets here is interesting. There are speed cameras on the roads. No need to tie up time getting pulled over by an officer, the cameras just clock you and send you a ticket in the mail. I learned the other day that my benefactor, Ernest, who did the driving back from the airport just received a ticket in the mail from that experience. When you rent a car, the ticket goes to the rental agency and gets added to your bill. Not that anybody behind me would have accused me of speeding!

After turning in the car, I got the laundry done (it was sunny), then walked to the University and spent quite awhile fixing the messed up pictures on the blog. So, if anybody sees anything still messed up, let me know. It should be fixed. Just before dark I walked the half hour home to a house full of teenage girls spending the night to celebrate Fiona's birthday.

That made for a short night, as I rose early to catch the 7:14 am train the next morning. The day was sunny and bright...a good day for a train ride back up through territory I had travelled in the car. First I went to Glasgow, where I changed trains to head up to the seaside city of Oban (West coast of Scotland for those of you looking at maps.) I brought a book to read, but found I was drawn to the window instead.

At Oban I got off the train and headed quickly for the ferry, which was already in port. I had 15 minutes from train arrival to ferry departure (and ferry ticket purchase) but I made it. In line for the ferry I met Winton Boyd, a UCC pastor from Madison Wisconsin. On sabbatical, he had just sent his family home after quite awhile touring in Europe and was headed solo to Iona. Here he is in a photo I took at the end, along with Steve (a vet who lives a stone's throw from Gatwick Airport) who was part of my week. Winton has the beard. 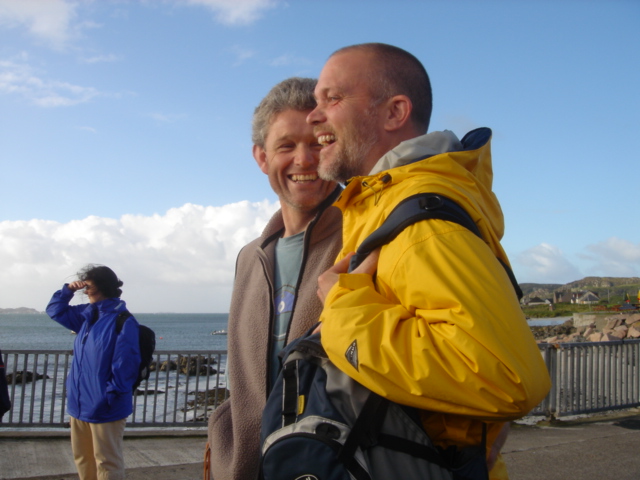 I was very glad for the company, and Winton and I stuck together all the way to Iona. I'm guessing he is a distant relative, as he was doing research on the Lord Boyd's of Kilmarnock, who are also in my family tree. Grandma Robertson's mother was a Boyd.

At last they opened the doors and let us board the ferry. 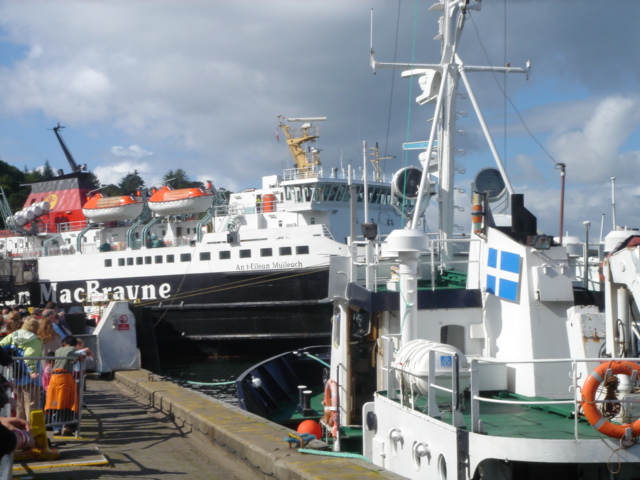 So, we got on, and set out for the island of Mull. From the ferry, here is a look back at Oban. You will want to know what the colliseum-like thing is there on the hill. So will I...I never found out. 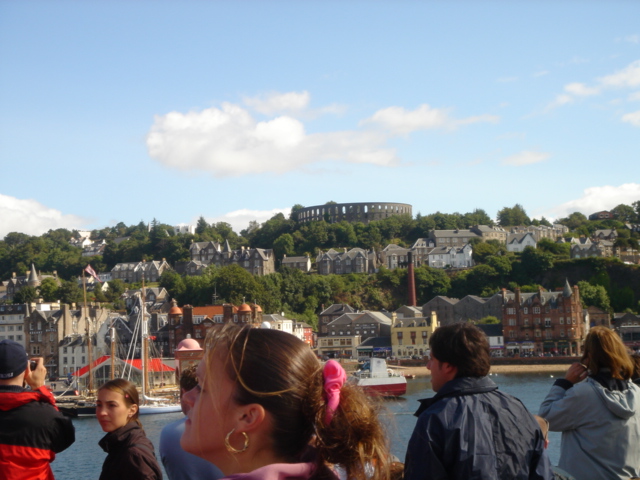 We moved out of port and soon were looking ahead toward the large island of Mull (pronounced mow if you're from Glasgow). 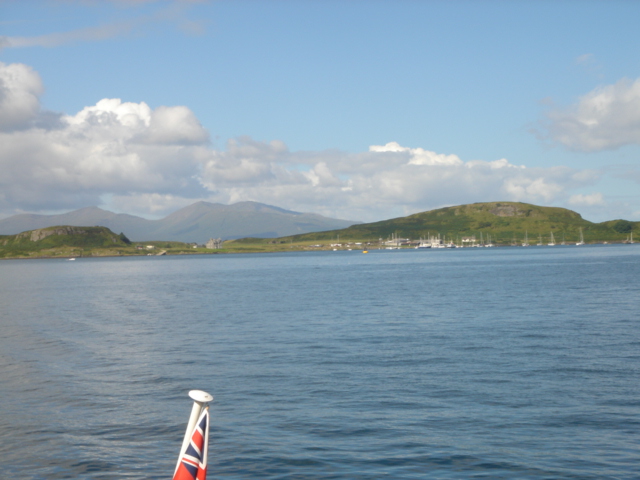 It was about a 45 minute trip, and then we pulled into the port. Just off to our left was a pile of busses. It should be mentioned that I did not succeed in getting everything I would need for the week into my own backpack, but the Butterfields had a larger pack that I borrowed, which did the trick. I still have bruises on my arm from hoisting the thing onto my back, but it was good to be free of hand-carrying luggage. It was also a handy means of crowd control. All I had to do was spin around, and I could clear a circle about 10 feet in diameter.

In any case, after finding the right bus and stowing our packs underneath, Winton and I boarded the bus for the 45 minute trek across Mull. It was quite lovely...much like the scenery you will see on Iona, only the hills were bigger. The largest is Ben More, an extinct volcano that rises to 3169 feet. It is very sparsely populated, about 2700 people for an island with 300 miles of coastline, but there are some towns...mostly on the water at various ends of the island. I didn't take pictures from the bus, so if you would like to see more of Mull, go to http://www.mediaworx.freeserve.co.uk/mulltour/.

The bus brought us to one of those ends, Fionnphort (pronounced fin-i-furt) where we got our luggage back and waited at the bustling port for the ferry to Iona. 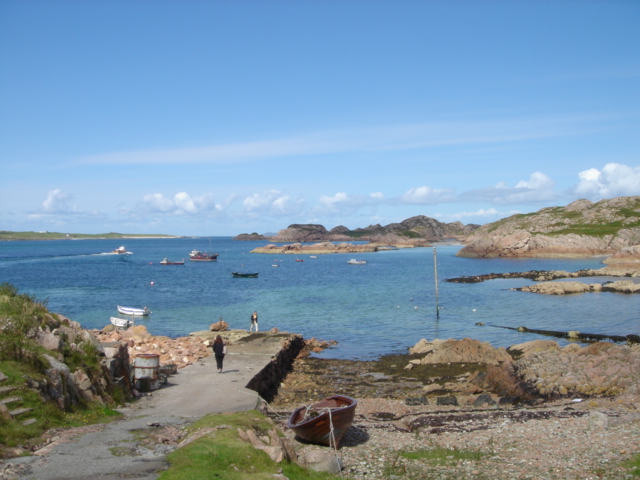 That's Iona you can see in the background on the left half of the picture. The ferry was a bit smaller for the five minute trip across to Iona. Here's the view of Iona from the ferry. 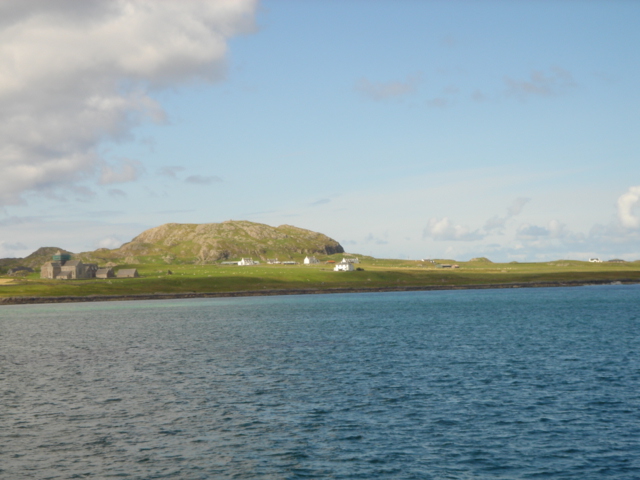 That is the Iona Abbey there on the left...built between 1421-1465. The green around the tower is scaffolding for some renovation work. Here it is a bit closer, from the land. That's Mull in the background. 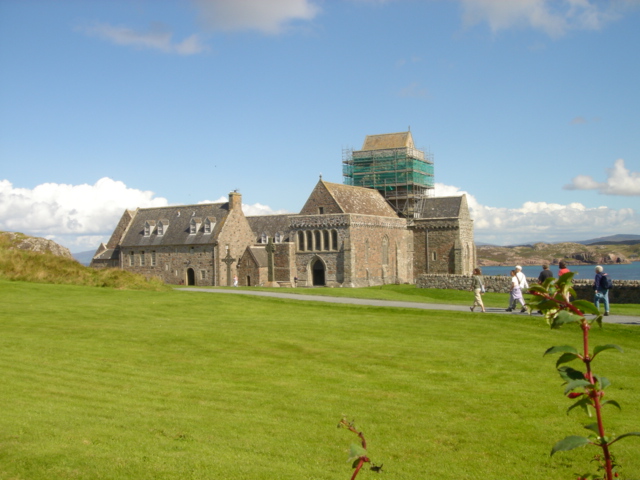 We got off the ferry and there were vans to cart our luggage to where we were staying. Of course there were some staying at various B&B's around the island and some merely coming as tourists for the day, but just under 70 of us were coming to stay as guests of the Iona Community at either the Abbey above or the MacLeod Center below. 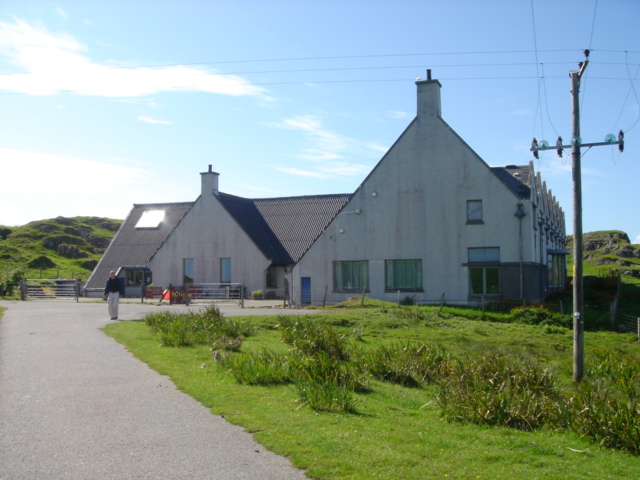 I was at the MacLeod Center, sharing a room with 6 others...three sets of mothers and children, two of whom were teens, one of whom was four. I took pictures of them but mistakenly had the camera on the 5 megapixel setting, making them too big to post here. I may add them in when I can get home to Photoshop and resize them. It was about 3:30 pm.

The nice clean walkway above was not always so clear, as the grounds were shared by these (the red marks are for identification. Different farmers use different colors). 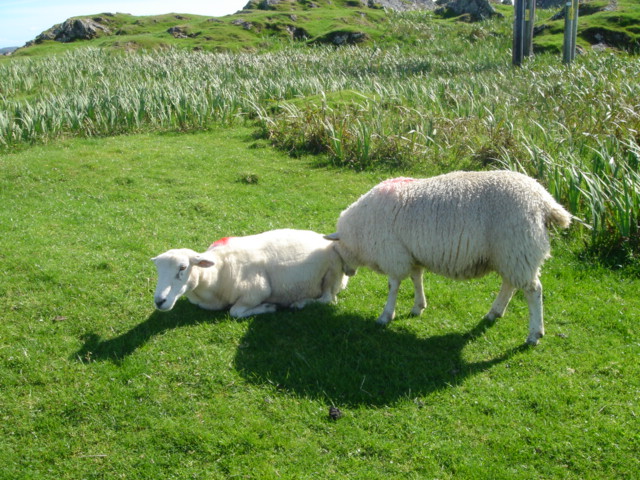 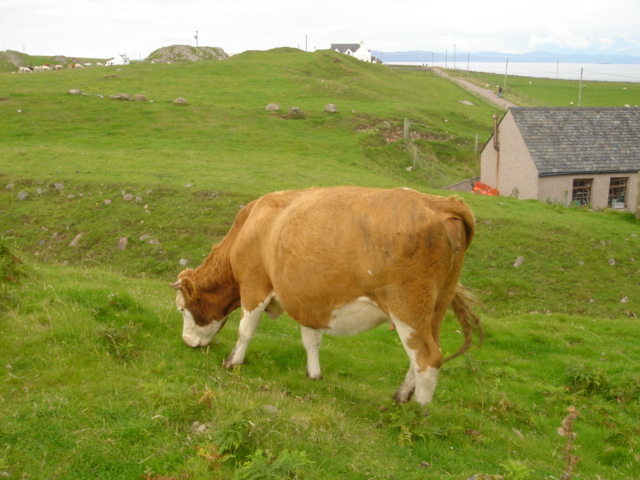 A picture I am sorry not to have came at the close of the day as I was headed down to the Abbey for evening worship at 9 pm. The sun was setting and the clouds above were not only streaked with red, but were in the shape of a dove in flight. Remember, this is Iona, the place where St. Columba came in 563. He came from Ireland and made this his base for spreading Christianity through Scotland. Columba's name means "dove."

After taking in the sunset dove, I hurried down to the Abbey for the service of welcome. A frustrating thing about Scottish worship, at least in the places I have been, is that most hymnals have only the words to the songs. New songs do not generally phase me, as I can sightread music quite easily. It was frustrating to have new songs and no music.

They did have a wonderful music director...a young woman (I would guess twenty-something) named Emily. For chants and responses, she did some teaching before the service began, so we would know the songs when we got there. I wish she had done that for the hymns. Emily is a twin to Holly Gaudette. Except that Emily's hair was dark and longer, they looked alike, talked alike, walked alike, and had the same bearing, mannerisms and expressions. Amazing.

After worship there was a time of fellowship in the Abbey refectory and then we retired back to the "Mac" for bed. In a new place and a 7-bed dorm, I didn't really sleep that night...even though I was completely exhausted. But the dawn came anyway..."and there was evening and there was morning the first day."