Sunday dawned brightly, and I was the second person up in the room...getting up about 6:45 am. Believe it or not, I was one of the first ones up in the whole place each and every morning. For one thing, it was easier to get a shot at a shower, and for another thing, I was part of the breakfast crew.

At Iona, you join in worship each morning and each evening (and afternoon if you're around), but you also join in work. While members of the staff do the primary cooking and maintenance, guests aid in the setup and cleanup of all meals and the day to day cleaning of windows, bathrooms, floors, and the like. I was part of Team A, which I'm told was the best deal. Our job was breakfast. We put up and set 7 tables of 8 places each (fewer people at breakfast than other meals), put out the cereals, jams and marmelades, sugar and milk, served the porridge, made the toast, cleaned it all up afterwards, and then helped with either the dishes or cutting vegetables for lunch and supper. My job was washing the silverware. Meals were mostly vegetarian, but it was not the place for anybody doing Atkins or South Beach. Carbs abounded...from the cereals and toast to bread and potatoes and "pudding," which never once meant pudding but referred generally to dessert in the same way "tea" meant supper.

Teams B&C had lunch and supper, respectively, but they also had cleaning chores to do after worship in the morning, while Team A was cleaning up breakfast. So we got out of the toilet-cleaning business...information that we tried to keep under wraps.

This first morning, being Sunday, everything was a bit later than normal. Breakfast was not until 8:30 with worship at 10:30 in the Abbey. Since I was up early, I went out for a walk before breakfast and went to St. Columba's shrine, a small little building connected to the front of the Abbey. I prayed in there for a bit and then came back to help my co-workers on Team A.

After church I walked around a bit, but didn't have much time before lunch. It was after lunch that I set about doing more exploring, grateful for another day of sunshine but wary that it might be the last. Rumors that the remnants of hurricane Danielle were on their way across the Atlantic were beginning to circulate. It was a new awareness for those of us who were Americans that when forecasters say the storm "went out to sea," it does not mean it disappears. There are other people across that sea who get it later. Remember Aberfeldy, Dunkeld, and those who had their homes washed away in Cornwall.

In any case, there was beach at the north end of the island, so I headed out. Iona is 3.5 miles long and the Abbey and Mac are about in the middle of it. The road went a good way down toward the beach. It passed this cross...unmarked, so I don't know how old it is, but I loved the way it was set in the flowers. 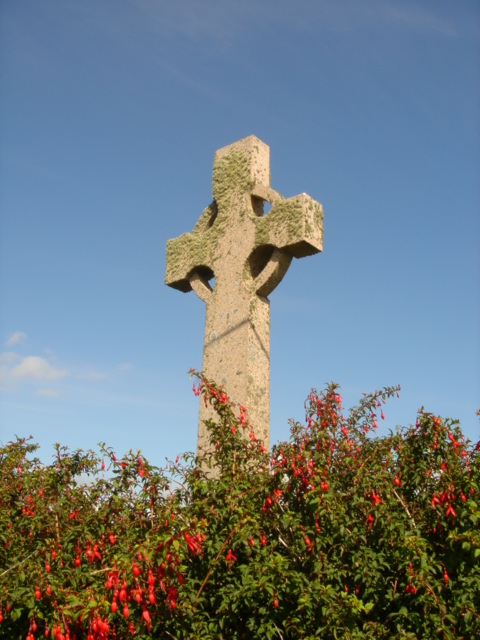 No matter where you looked, it was lovely. 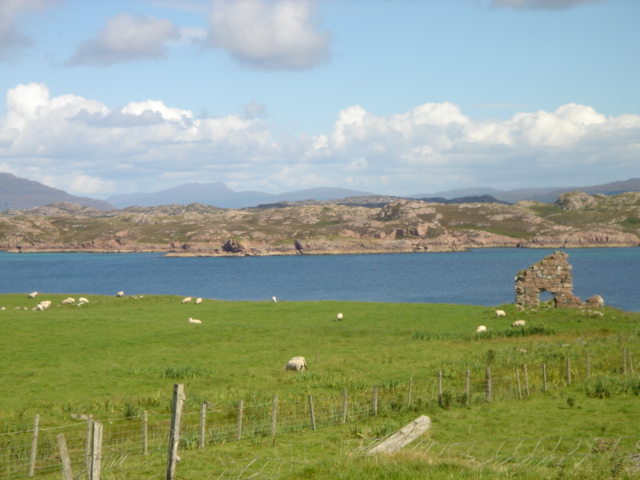 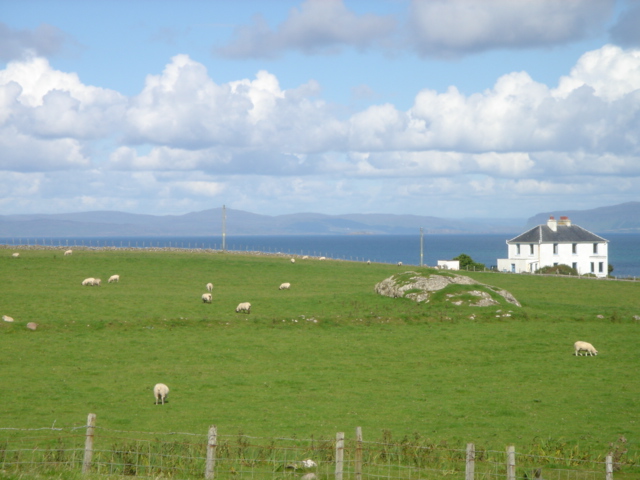 And then the road came to an end at a pasture gate. Guests were allowed into the pastures to get to the beach, and the farmers hoped they remembered to close the gates behind them. Come with me to the beach. 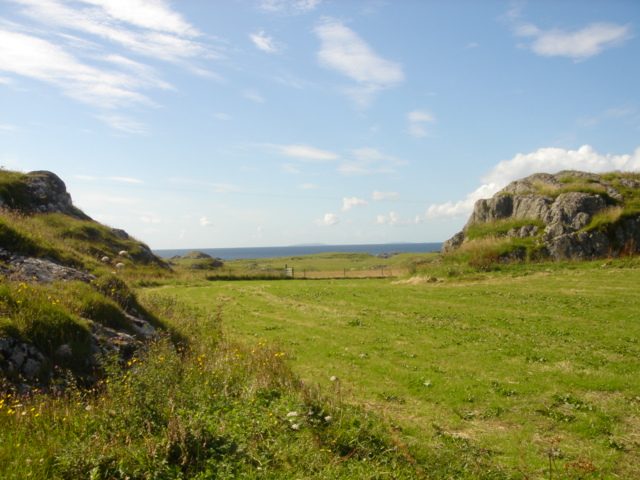 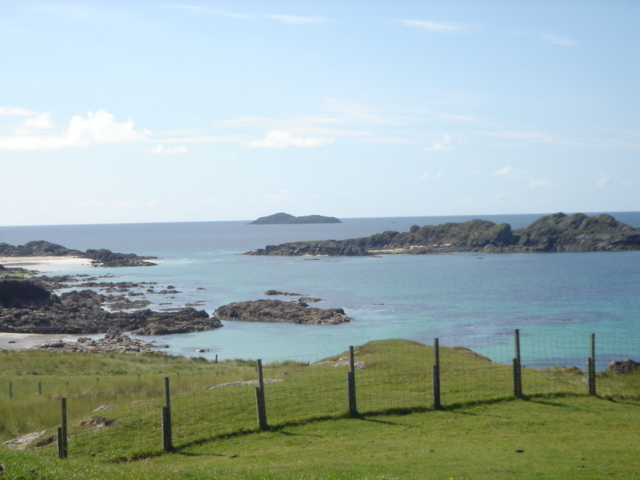 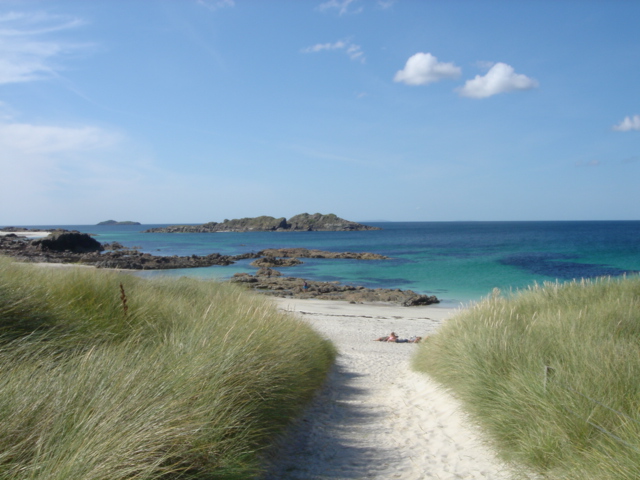 Yes, that is a sunbather at the end of the path. There were others as well...and some in swimming. I was wearing two layers of clothing and was grateful for them. All the people seemed to be in this part of the beach...so I went around further to a more secluded place. 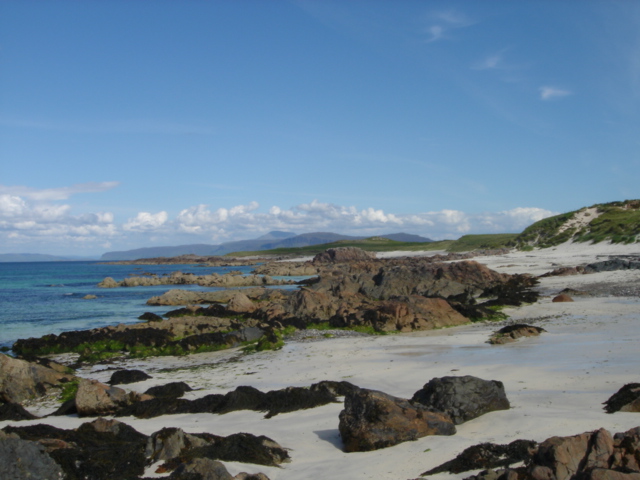 The tide was going out, leaving wonderful patterns in the sand. 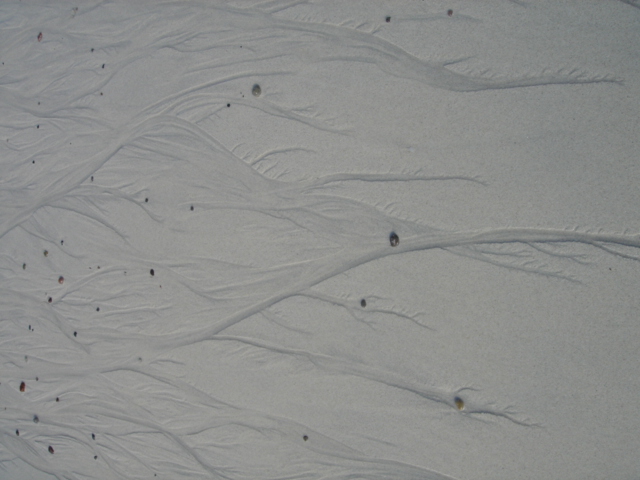 I picked up feathers and shells and stones. Then I just sat for awhile in the sun and listened to gentle waves come in, remembering that more than once it was not gentleness that washed ashore but Vikings who sacked the monastery and murdered the monks on so many occasions that the spiritual center of Scotland eventually moved from here to safer ground.

Then it was time to start back if I were going to make the next event. It was hard to leave, the day was so beautiful. 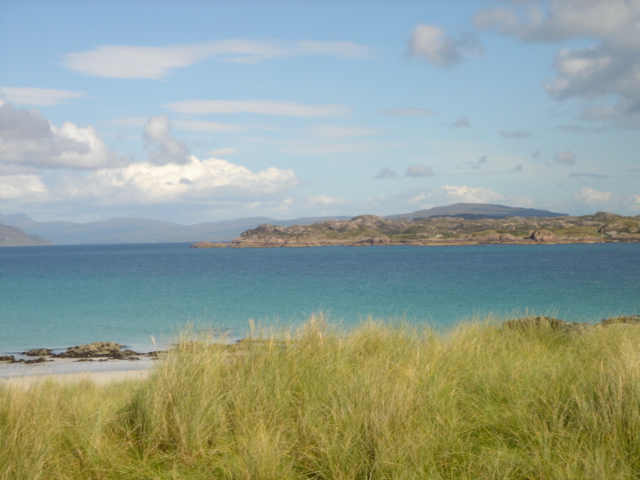 Again, that's Mull you're looking at across the water, and in the far background the mainland of Scotland.

The next event was in the chapter house of the Abbey. The chapter house in abbeys is the place where the monks met to do business, and in this case our business was a "big sing." That is because it was Sunday. On two other days we had a "wee sing." The difference between a big sing and a wee sing is about 15 minutes.

The sings were led by Emily, and in the plaster-covered stone of the chapter house, the music sounded grand. All the music at the sings and most of the music at worship in the Abbey was unaccompanied. We did a lot of world music, which Emily taught us in four parts without us having a shred of music. It was pretty amazing. In about five minutes she had taught all four parts...often in an African language...and we put it together, adding a part at a time until the room rang with the harmony. On Wednesday and Thursday, those who took part in the wee sings in the afternoon became the choir for the evening service (pronounced sairrrrvis...roll the r).

The sing was finished about the time that Team C needed to get set up for supper, and we headed back to our respective centers...the Abbey and the Mac. Staying at the Abbey was a group of teenagers from Massachusetts...Episcopalians participating in a 2-year program called Journey to Adulthood. It culminates in a pilgrimage, which they were making with this trip. They had begun, appropriately, in Canterbury.

Sunday evening we were introduced to our program for the week, which was storytelling. There were two leaders...a woman named Yvonne from Northern Ireland and a man named Russell from Glasgow. Both of them presented to us together on Sunday night...with Yvonne doing a puppet show and Russell telling us a story about the unluckiest man in the world (pronounced wairrrrld).

An interesting cultural difference showed up in the puppet show. The storyline was about a old white woman who went to participate in a program. As she arrived at the venue, she was greeted by a young black woman and instantly stated that she would not stay in such a place. There were a number of Americans in the audience, and we were sure this was about race relations. But it wasn't. The woman wouldn't stay because the puppet was Catholic, not because she was black. As Americans, we imposed our issue on the situation, but those from Britain never went there. Here the main divide is sectarian...the Protestants and the Catholics. I just thought it was a interesting cultural note.

The evening service that night was a service of quiet. Nothing like sitting in silence in a candlelit medieval abbey. They could have all been that way and it would have suited me just fine. This was especially true since silence was quite hard to come by. Over half the guests staying at the Mac were children...most of them elementary age, four of them under 5 years old. The room labeled the "quiet" room roared with videos, the common room with more active games. Each meal ended with a moment of "silence." In a week of three meals a day, it got to actual silence exactly once.

Bedtime was welcome, and I could hardly stand up by this time. They say that the veil is thin on Iona. I found that the floors were thin and a room full of elephants populated the room above ours. Once everyone both in my room and the room above had gotten into bed, I was at last able to sleep, rising again before 7. And there was evening and there was morning the second day.