After the usual morning rounds...now on a weekday timetable of earlier breakfast and worship, we went off for the morning program, choosing between Yvonne and Russell. Although I got to be quite close to Yvonne during the week, I had experience with puppets...so I went with Russell.

It was a large group...close to 40 people I would say, but most of the young children chose the puppet option or did neither, so it was a bit calmer than it might otherwise have been. After hearing a story, we worked on a story as a group which was really a lot of fun. I will be looking for a way I can work something like this into a church event. We had a couple of hours, but it could have gone on for a weekend...our story was only just getting going. Here's how it went.

Russell gave us the setting...in this case a castle with three floors...the main hall on top, the servants' quarters below that, and the dungeon at the bottom. Our theme for the week was the Beatitudes, and this one was supposed to keep in mind "Blessed are the meek." After we had the setting of the castle, he invited 9 people to describe a character who has just entered the Great Hall. With more time, everyone in the room would have invented a character. Those picking a character gave the character a name and a physical description. Nothing more.

So...we had Rufus the leprechaun, Elizabeth the old woman in a worn, brown dress, Gabriel the wanderer, Tom the fat man, Wanda the cat, King Ronald, Robin Hood, Harry the ghost, and Hugh in full Highland dress. Once we had the characters we were each asked to imagine ourselves as also being in the Great Hall and entering into conversation with one of the named characters, who told us something of what they had seen in the castle. Then we got into pairs and told the other person what the named character had revealed to us.

Back in the large group we shared all the information we had from these "conversations" with each person sharing what our partner had told us. It was amazing how much of a plot we had by the time we were finished. Old Elizabeth was not who she seemed, there was treasure in the dungeon that Robin was bent on stealing, if Hugh, who was having an affair with Elizabeth, and his insurgency had not deposed the King and gotten it first. Anyway, you get the idea. It was a blast.

After lunch came the main event of the day...a boat trip to the island of Staffa about five nautical miles off the north end of Iona. What is the attraction at Staffa? Fingal's Cave, the only sea cave in the the world formed by hexagonally-jointed basalt and the inspiration for Mendelssohn's Hebridean Overture. Oh...and up until about two weeks ago...lots of puffins. The are gone now, however, to wherever puffins go when they leave Staffa. Probably Vegas to try to win money for the trip back.

The day was overcast and windy, making for lots of whitecaps on the water. We piled on and set out. Soon, everyone was pointing and saying there were sharks. Nervously I looked around, but could see nothing. Finally I had it explained. These are birds very like a cormorant, only they are called shargs...not quite as likely to take my arm off. 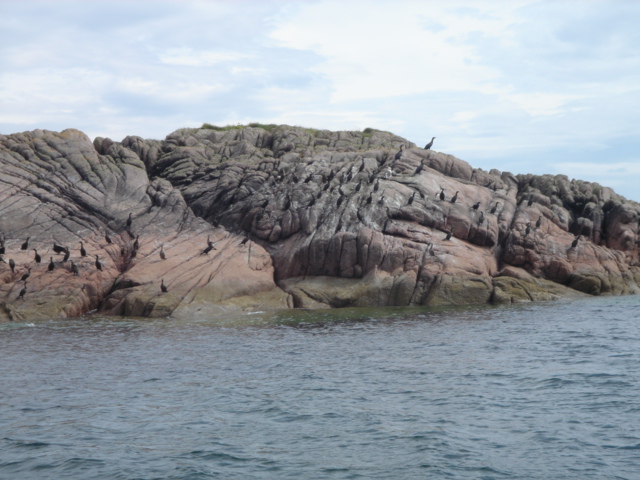 I also have a picture of a couple of seals on the rocks. Unfortunately, I had my camera set on the high setting, which means I can't post it up here. Again, it will have to wait for Photoshop. Past these rocks we headed into more open water. 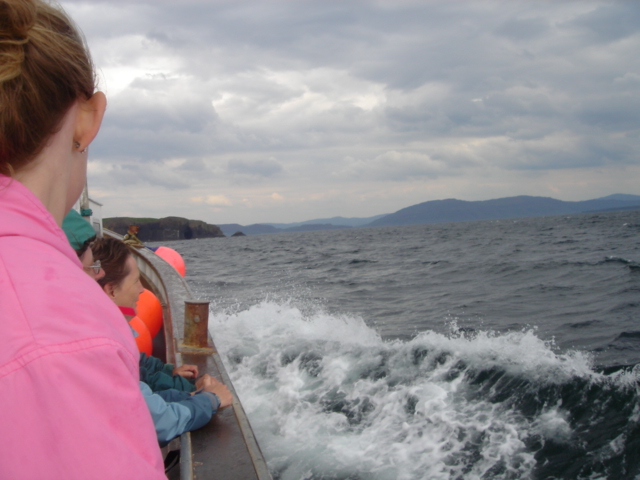 You can see Staffa off the front of the boat. Here's another view. 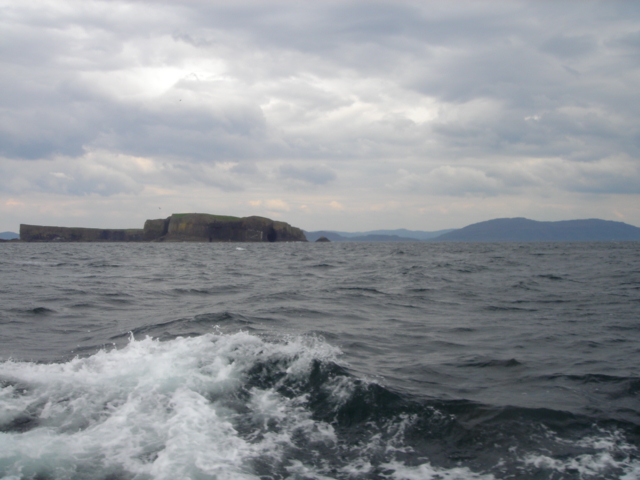 Fingal's Cave is the dark part on the right hand side. I have enough pictures of this approach that you can practically flip them and make a movie, but here is what it looks like from the water when you finally get close. 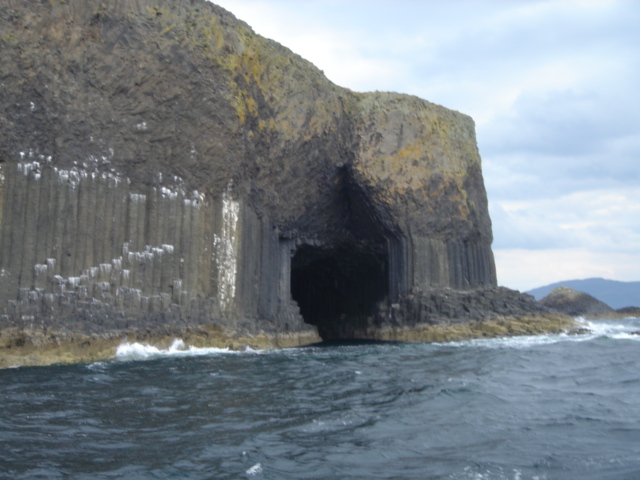 The white marks are from pillars falling off. The boat went to the right around the end of the island to a little dock along the side of the island. From the dock there were two ways to go...a ladder up to the top or a precarious walk along the basalt to the cave. Most people headed for the cave, so I went up. Here is a look back to our boat from the top. 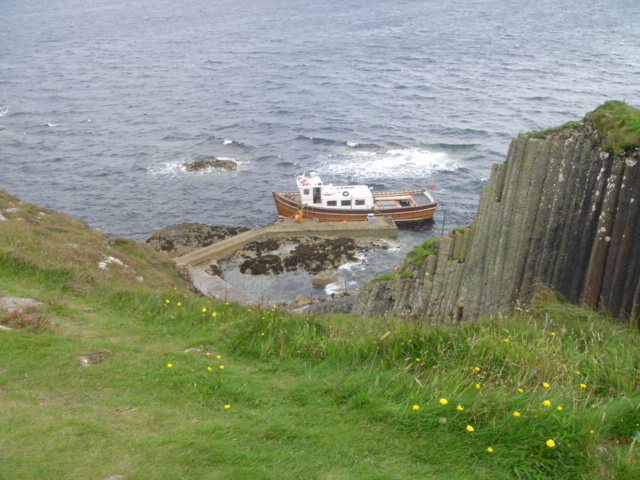 The island at the top had some remnants of a dwelling or two, but it hasn't been much lived on and is completely vacant now. An American owned it for a bit in the 70's and then turned it over to the care of Scotland. Now it is home to puffins and is a feeding ground for seagulls as the crab shells and other debris on the top attested. Here's another view along the edge. 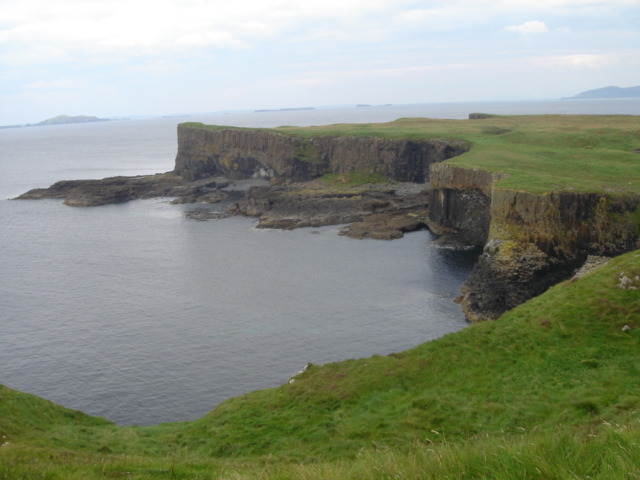 Not exactly a place for someone like me with a fear of heights, but here's a view of the cave entrance from above...or at least as close as I dared get. 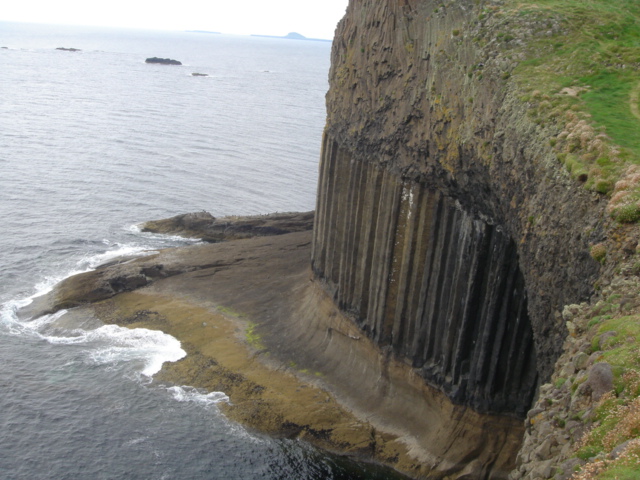 A word about seabirds and Scotland. The northern islands of Scotland have been famously home to thousands of sea birds. No more. Maybe you don't believe in global warming, but the ocean here has become to warm for the plankton, which is the food source for a particular kind of eel, which is the primary food of the seabirds. The birds are basically gone.

The top of the island is fairly extensive, but we only had an hour ashore, so as most of the people began to climb up to the top, I went back down to the cave. Here's a look back at part of the walkway at a point where I felt I could let go of the handrail. 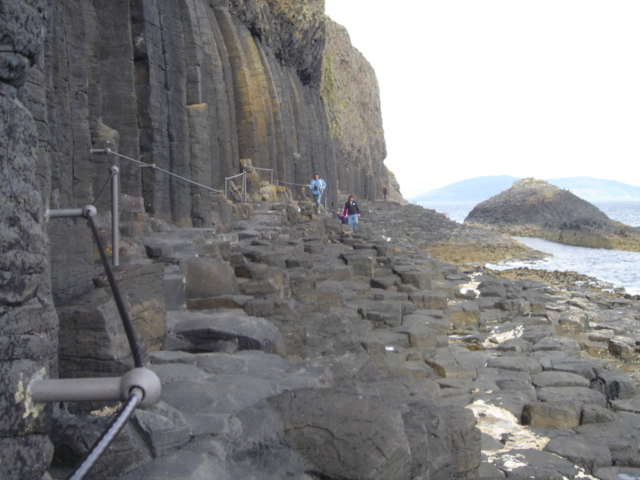 That is looking back toward where the boat was moored, but just around the corner behind where I am standing... 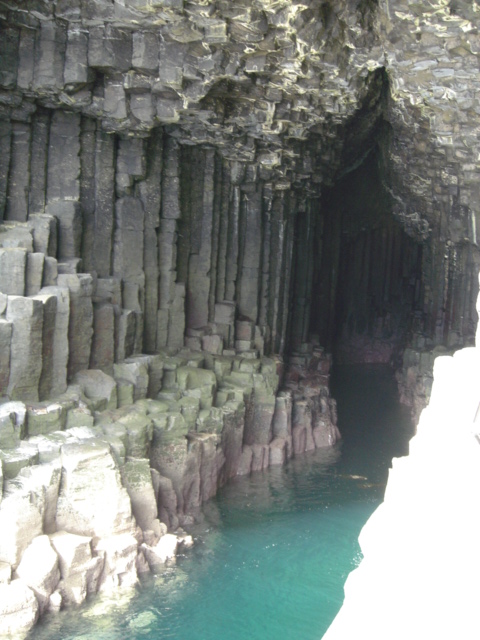 And a little further in... 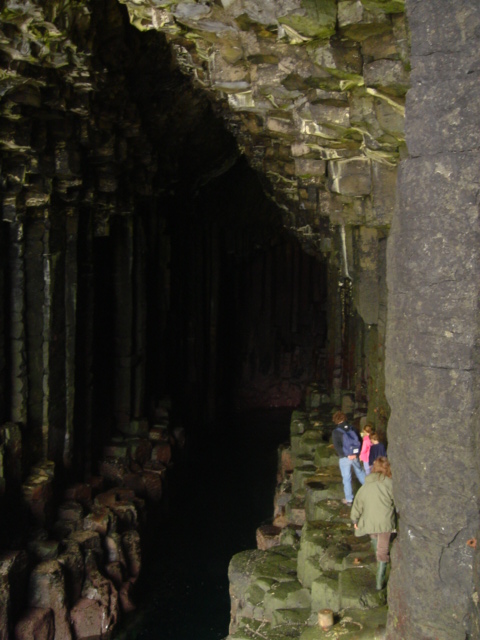 That is Steve the vet and his kids going past the roped off area that ended the walkway. This is me sitting at the rope...looking very much like I am tethered to the cave. 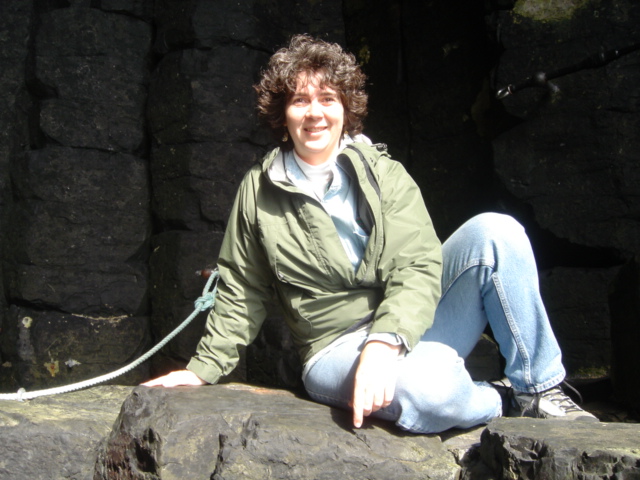 Okay, so it wasn't a good hair day. The cave was amazing...like being in a huge cathedral, and with similar grand acoustics. The draw of the cave made me overcome the fear of the long drop into the water on my side and at long last I ventured past the rope. Here is the entrance from inside. 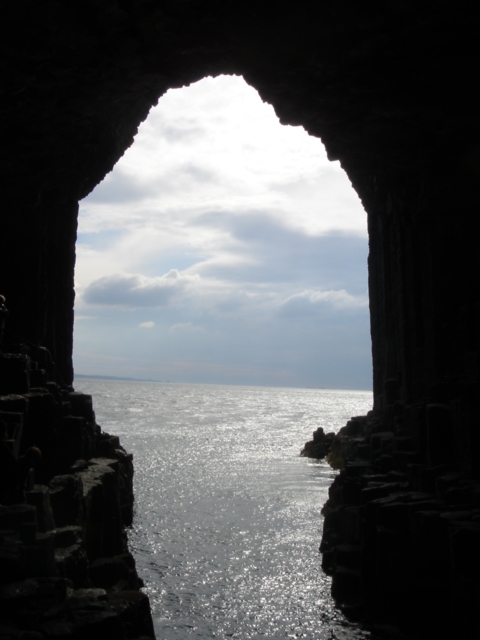 There was just Steve, the kids, and an older woman staying at the Abbey. I sang Amazing Grace, and Steve said the hair on the back of his neck stood on end. I'm so glad I went past the rope.

The hour was drawing to a close. Not wanting to spend the night in the cave, I reluctantly left and headed back for the boat. 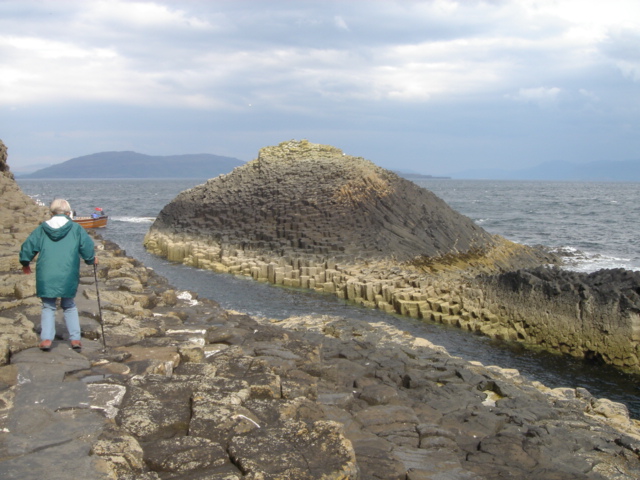 The formation there in the center is on lots of postcards. And so we all went back to Iona with only one of the kids getting sick over the back of the boat. 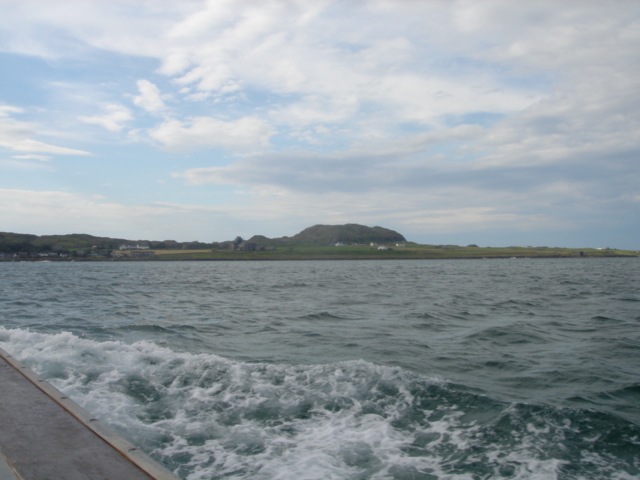 The evening session done by one of the program staff on Iona was about healing, followed by a worship service at the Abbey led by the youth.

After worship was a ceilidh (pronounced kaylee) in the village hall...an evening of traditional Scottish dancing, interspersed with spontaneous entertainment from those in attendance. I was really tired, but I stayed until almost 11 pm watching the dancing and listening to the jokes and songs. It was one of those unhappy times when I remember that I am a one rather than a two, since it was all couples dances. People paired up in all sorts of unlikely matches, but still, the dances are designed for a man and a woman.

The evening was made more comfortable by Lisa Bodenheim and her children, Jonathan and Sarah, who I grew close to across the week. Lisa is another UCC pastor from Wisconsin. Here they are. 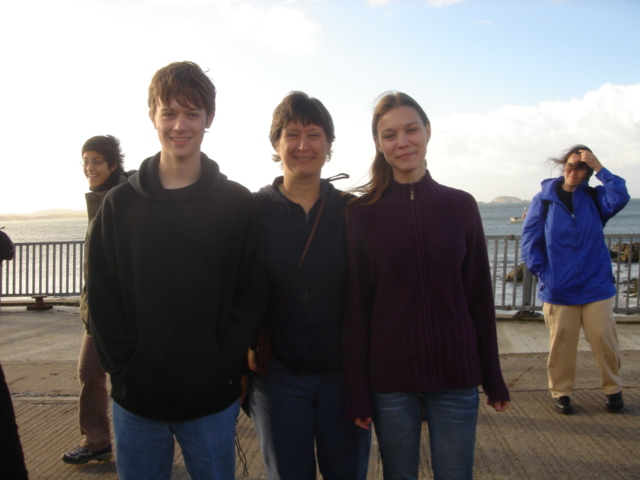 Lisa reminded me quite a bit of Brenda Borchers. Jonathan is a gamer, and Sarah stuck with me at the sings. Great family.

Coming back from the Ceilidh, I gladly crawled into bed in preparation for a busy day ahead. And there was evening and there was morning the third day.