Tuesday was the day of the pilgrimage...a 7 mile hike around the island, stopping at important religious sites. The usual breakfast and worship was followed by Team B making up bag lunches for those of us going on the hike. It was then I realized that I didn't have any sort of pack to take. The backpack from the Butterfields was way too big and my fanny pack was way too small.

My raincoat, however, had big pockets. So, on one side went two sandwiches and my camera, while on the other went a bottle of water and a banana. The day was warm so I tied the coat arms around my waist and set out with the other pilgrims at 10 am. The pilgrimage was open to anyone who wanted to join us and three German nuns in full dress did just that.

We began at St. Martin's cross in front of the Abbey. This carved cross is made of just one piece of stone. Here is the placard... 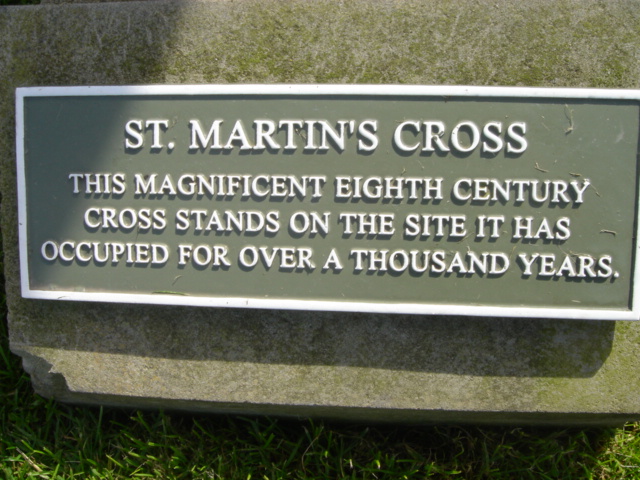 And here is the cross.

We set out first along the road. Going just a little way to the Nunnery (no picture, sorry)...a ruin of a nunnery founded in 1203. At the various places we went we stopped for a brief reflection or prayer...and to let the end of the group catch up. There was a good sized bunch of people.

Once we left the road, the going got a bit trickier. Much of the land is peat, and you know when you step on one piece of ground and the ground goes up two feet away that careful stepping is in order. One of the children decided that what the sheep were really saying was not "baaaaa" but "baaaaag." Beware of the bog. Sometimes I could avoid it by climbing up on a high place. Even those have their traps however, as I discovered when I slipped on a rock and grabbed the fence to steady myself. It was barbed wire. 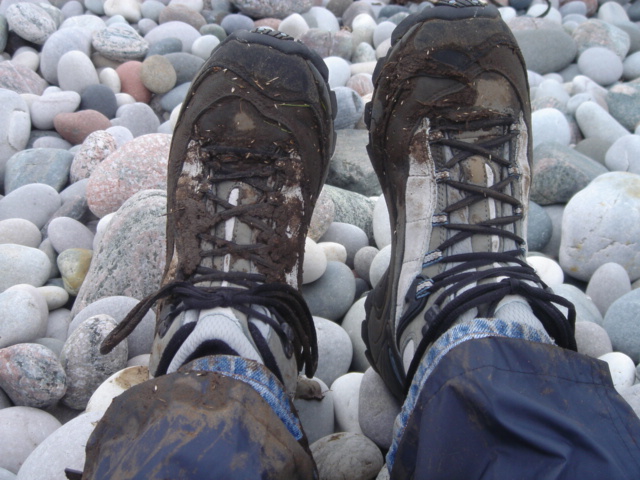 The prize however went to one of the teens from the Abbey who sank up to her knees after a rather spectacular missed jump. We stopped in a number of places, but it was a fairly early stop where I sat down to wait and forgot what was tied around my waist. I sat on my banana.

Over hills, through the bogs, and over the rocks we scrambled (remember the nuns in their floor-length habits) until the place where we had lunch...Columba's Bay. 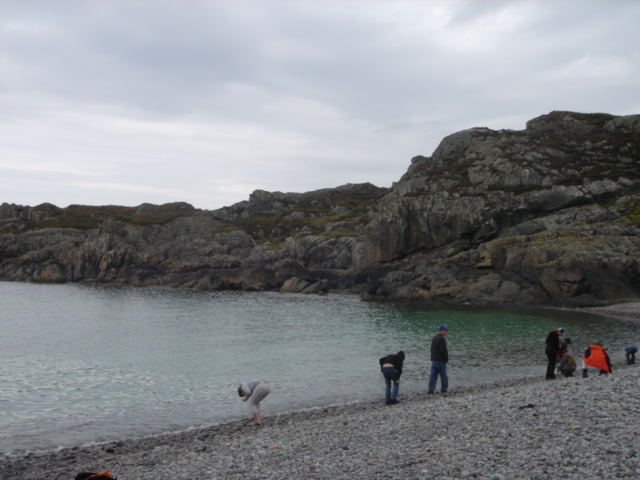 Supposedly the place where Columba first landed as he came from Ireland, the beach is solid rocks...lovely rocks, some of them marble washed up from the nearby marble quarry that has built altars both in the Abbey and in Jerusalem. We ate lunch here. 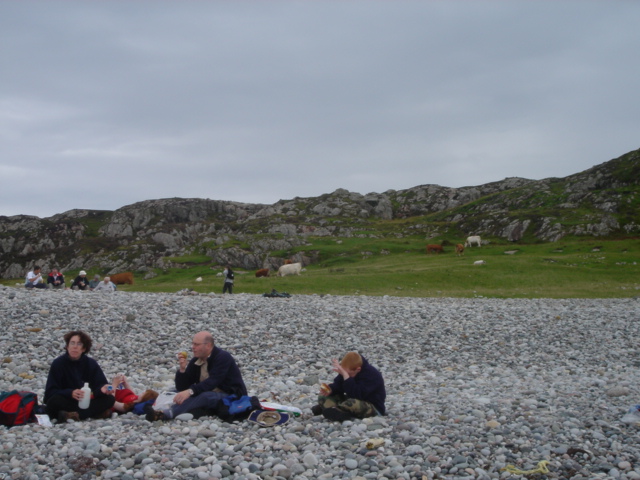 And looked for cool rocks. 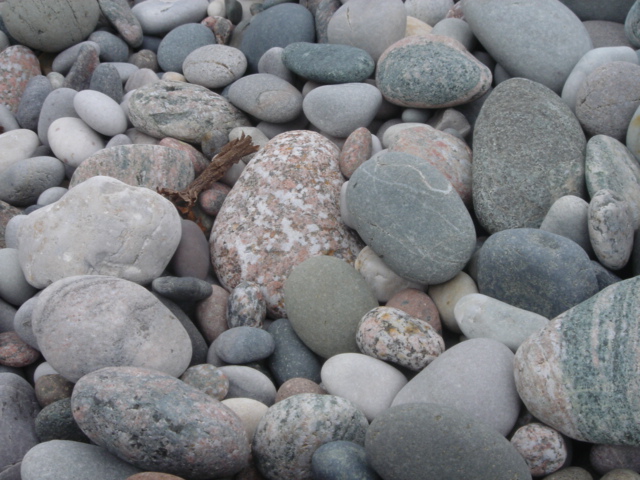 I found a cool one with what I think is St. Columba's image on it. I didn't take a picture of it, but I'll be bringing it home with me.

After lunch it was back to the hike and a plague. Since the first day of my arrival, the natives here have been warning me that I came in midge season. "Buy midge cream," I was told, they're terrible. But in four and a half weeks of visiting areas of Scotland north, south, east, and west...and lots of hiking around in woods...I had yet to have a problem with midges. That's because they were all in the glen just after Columba's Bay.

Almost as soon as we left they were upon us...a plague of Biblical proportion. Tiny swarming insects that bite and itch like mosquitoes. We went as fast as we could, given the rocks and bogs and uphill climb. Every time I opened my eyes, they swarmed into them. I swallowed enough to count as supper. They were in my ears and up my nose. The younger children were crying, the adults stumbled and coughed through the sea of midges...for about half an hour. Then we were out and at the large field called the machair (pronounced macker), where a van from the center had brought tea (real tea, not the tea that means supper) and flapjack (a granola-like substance). 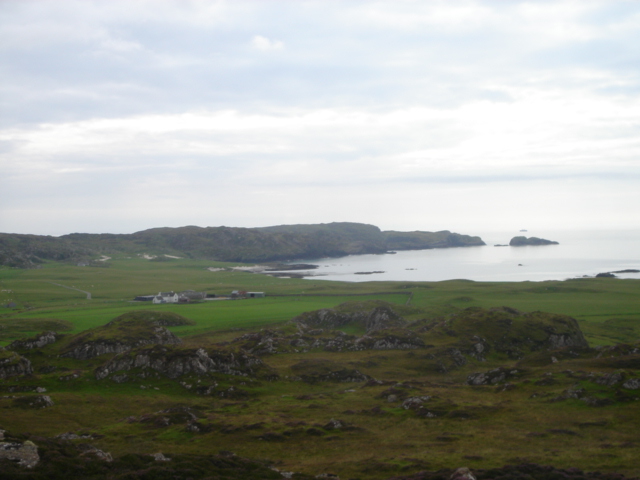 It was here I discovered that although I had consumed my fair share of midges in every uncovered orifice, I had not gotten a single bite. Most others looked like they had measles. Faces, arms, necks, and legs were covered with the flat red spots.

This was one of several places where people had an opportunity to leave the group and go back by an easier road. After the trip through midge hell, a number took that opportunity here. I went on with the rest of the crazy people. It was 2 pm. We were heading north and terrain was easier for a bit. 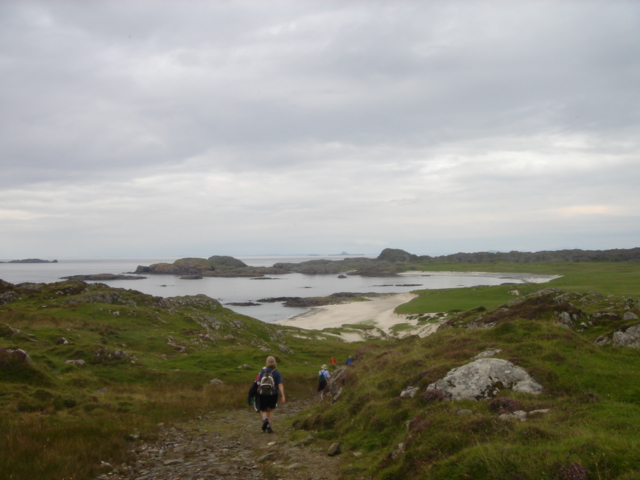 Then it was up a big hill where we began what was supposed to be a silent 20-minute walk to the remains of a circular structure that was perhaps a hermitage for Columba when he wanted to escape the noise of the monastery. However, we had children...one a toddler. The walk was quieter than at other times, but hardly silent, and the lovely reflection as we sat in the hermitage ruins was also peppered with the sounds of children who have had quite enough of walking and midges and sinking in bogs.

We ended back at a place where I also don't have a picture...the Reilig Oran, the cemetery and chapel next to the Abbey. Although there is nothing anywhere nearby to tell you so, it was here that 60 Kings were buried before the Norman Conquest in 1066. 48 Scottish Kings, including Duncan and Macbeth lie here. Also four Kings from Ireland, 8 Norse Kings and one English King rest in the Reilig Oran. St. Oran's chapel here in the cemetery dates from the 12th century and is the oldest intact building on the island. We went in here, where the swallows have a nest, and I thought of Psalm 84: "Even the sparrow has found a home, and the swallow a nest for herself, where she may have her young--a place near your altar, O Lord Almighty, my King and my God." She indeed came in and fed her young as we gathered and sang one of the songs Emily had taught us to close our time together.

We got back about 4:30 and headed for the showers before supper.

I was really beat by the evening, but went to the evening session, which was information about the Iona Community. George MacLeod, for whom the center was named founded the community in 1938 with a project to restore the Abbey. The project was designed both as a work of justice...he devised it as a way to give work to the unemployed poor in Glasgow...and as a training ground for pastors. The pastors would come here to work and to minister to the laborers, learning to leave their ivory tower language and concepts and preach the gospel in a way that the common laborer could understand.

The community now is a scattered and ecumenical group of both clergy and lay with a commitment to social justice and mutual accountability. When the session was done, I went out and took a walk down the road a bit. As I headed back, a group of sheep were moving from a pasture on one side of the road to one on the other. As I watched, I saw that the last two sheep were having immense difficulty. Both were lame, and it was a gut-wrenching sight to see them try to get across. One basically crawled on its front knees...which were blackened from constant use, and the other limped and hobbled, trying it's best to get where it needed to go, but obviously with great difficulty and pain.

"So it is with my people. They want the good pasture, and they try their best to get to where they need to feed...but they are crippled and lame, and the shepherds are busy elsewhere. It is not the fault of the sheep that they are lame. Tell the shepherds to care for the sheep...to wipe out the infections that rot their hooves and bring them down. My sheep know what they need, but they cannot reach the pasture...they stumble and fall. Tell the shepherds to care for the sheep."