Bother. I finished yesterday's blog and was about to start today's, when I ran into a snag. I uploaded yesterday's pictures from a CD I made at the house. This computer has a USB port, but it has some sort of security override that won't let me hook up the camera. Says I would need to log on as an administrator to add a device. Rats.

So I guess it will be tomorrow or so before you get to see pictures from the Callander Highland Games and Doune Castle. In the meantime, who can e-mail me and tell me what famous movie was filmed at Doune Castle? Answer in the next blog!

I ended my travels today at an Antiques and Art Center between Callander and Bridge of Allan. After looking at wonderful things far too big to put in my suitcase, I went out and had a cup of coffee in their cafe...outdoor tables...I now have a bit of sunburn. Soon an older man who could only shuffle in tiny little steps came and sat down with me. "I have Parkinson's," he said in a British accent. "So does my grandmother," I replied. "Well that doesn't help me, now, does it?" was his response. He went on to tell me about serving in the British Navy in Singapore in WWII and how he has gotten over hating the Germans but not the Japanese. I learned that his uncle was big in Kraft foods in the US and at the bombing of Pearl Harbor he put Kraft at the service of the US military. He said I must have studied languages because my English was very good. He noted that most of the Kraft people from the States who visited had terrible English and couldn't spell. He's a collector of scrimshaw and has written art books. About 45 minutes later, after a pot of tea, he shuffled off. And so it goes. Tomorrow...with pictures.

It is Saturday night, and I am at a very deserted Stirling University in the Chaplaincy office. They have a broadband connection here, so I'm hoping the posting will take less time. I'll begin with yesterday. Apparently the Scotland weather gods were none too pleased with my disparaging remarks in my last posting, and the last two days have been sunny and warm. Or perhaps I strayed into France. In any case, if it is France, the Wallace Monument must be really big, because you can see it from here. Here it is in better weather... 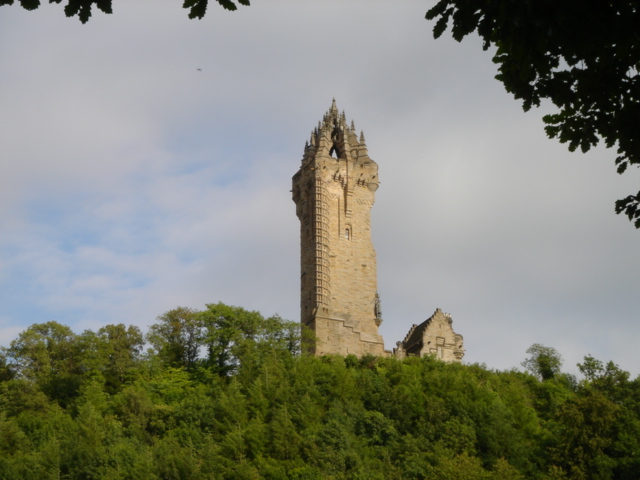 Boy, that loaded about a thousand times more quickly than on the dial up. Okay, the picture above was actually from the end of the day yesterday. I began the day at the monument, too, but the sun was in the wrong place for a picture. I began the day at the monument because the Stirling bus tour picks people up from there. Mrs. Butterfield drove me here and then I picked up the bus. It is a double-decker bus with the top deck open for viewing. I didn't get a picture of the bus, but it is a bright red, so that others can gawk at the tourists.

The first stop after the monument was the one place I had already been...the Bannockburn Heritage Center. That's the place that was next to the car rental. But I didn't go inside the museum before, so I got off and went in. They did a nice job inside. I bought myself a tea towel with the famous part of the Declaration of Arbroath on it: "For as long as but a hundred of us remain alive, never will we under any conditions be brought under English rule. It is in truth not for glory, nor riches, nor honours that we fight but for freedom--for that alone, which no honest man gives up but with life itself." I was so inspired I went into the tea room and had some leek and potato soup.

Since it was a beautiful day, I went back out to the statue to get a non-hazy day view of Stirling Castle. 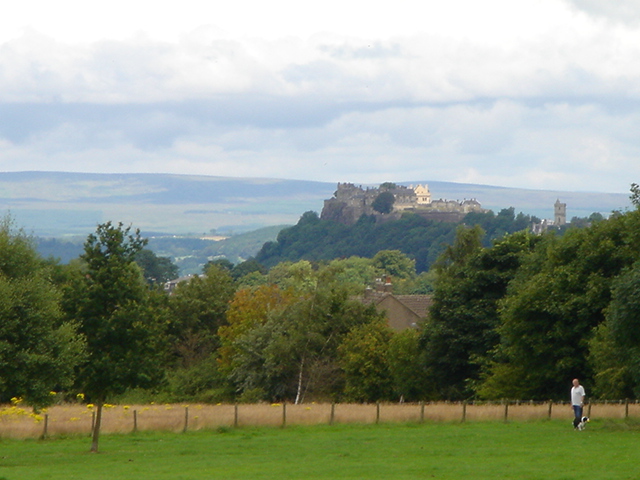 Then it was back on the bus (several of them go around so you can get off at any stop and just wait for the next bus). The next stop was Stirling Castle. Here it is from below.


From this side you can't see the Great Hall, which is the golden building you see in the other picture. A 20-year renovation project has just finished a few years ago. They found some of the original color as they did the renovation, so the outside "King's Gold" color is accurate. It's not a paint, but a kind of cement-precursor.

The bus climbed the hill through the old town and we got off on the outer battlements. Here is a look at the front gate, which was the older part. Queen Anne added the outer sections. AR is the set of initials carved on the keystone. Works for me! 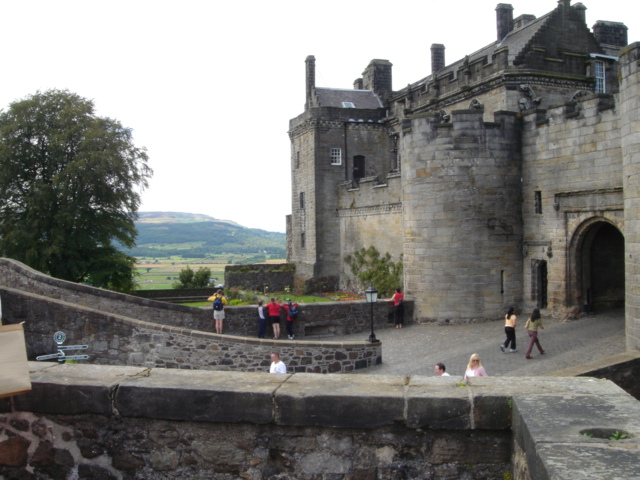 That green area just in front of the wall to the left of the gate is Queen Anne's garden. Here's another look at it. 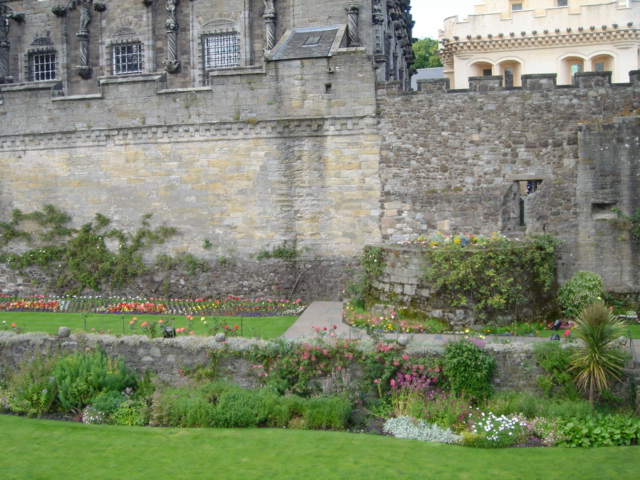 Now, standing where I was for the gate picture and turning around, here's the view. You'll recognize the monument on the hill. 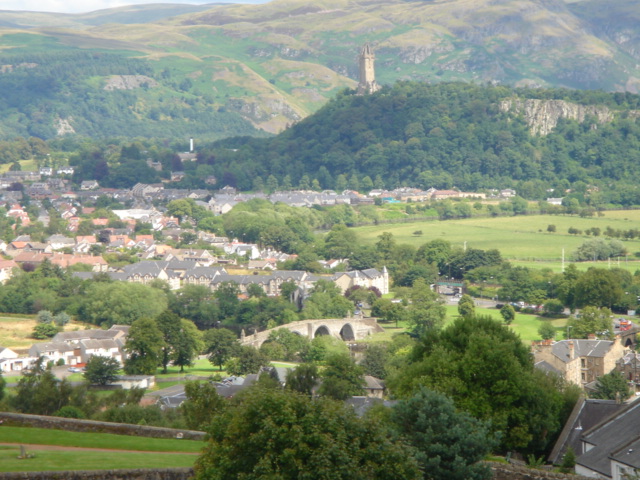 The arched bridge at the bottom of the picture is Stirling Bridge. This is not the one where the battle was fought (The Battle of Stirling Bridge--Wallace's victory), since part of the battle tactic was to destroy the bridge. The original bridge was close by, however. They both spanned the River Forth. I've been getting all my dates wrong, and all the books that would tell me about this are back at the house. But I think I'm right in saying that this "new" bridge dates from the 1500's. It is closed to cars, but is still open to foot traffic. I have the date of the house I am staying in wrong in the earlier post, too. Move it back to the 1700's for the earliest part.

As I looked at the marvelous panorama from the battlements, it dawned on me that my camera has a video feature. I have no clue whether the video will load on this blog, but I'm going to try.
Nope, it won't. So you'll have to visit and watch it on my computer. Back to the castle. Here is a view that shows the Great Hall peeping over the walls. 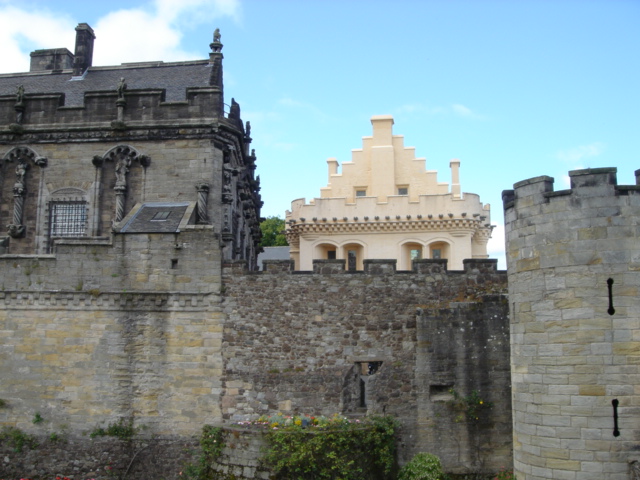 This is just above Queen Anne's gardens. The garden in the bottom center of this picture is made on the base of a now-ruined tower. The gate originally had four towers, instead of its current two. Even the two that are there were taller with the typical peaked roof and flags. Must have been some sight.

Here is a picture inside the Great Hall. Unfortunately, it is doomed to be sideways, as the method I used on John's computer for the other pictures doesn't seem to be available here.
The beams in the ceiling were part of the restoration, but it was assembled the way the original would have been...with pegs. Not a nail in it. 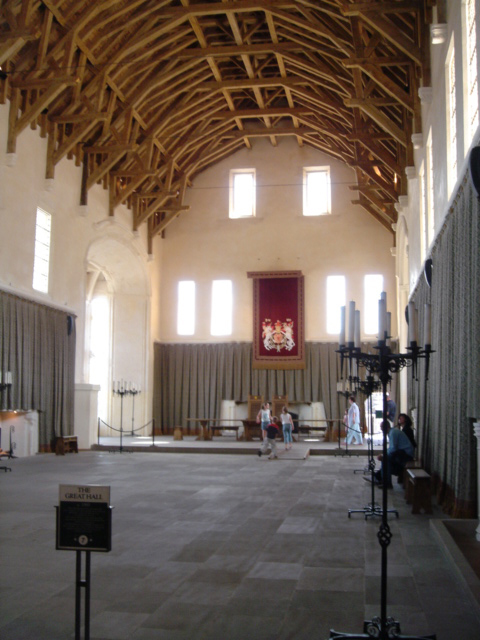 The hall is currently used for concerts, weddings, and other events. The tapestry at the front was a gift from Queen Elizabeth when the newly renovated hall opened. Now that the hall is finished, they are working on renovating the palace. That will be finished a number of years down the road. One of the things that will go in there is a series of 7 tapestries depicting the hunt of the unicorn. Weavers are doing them on site. They have finished two of them. 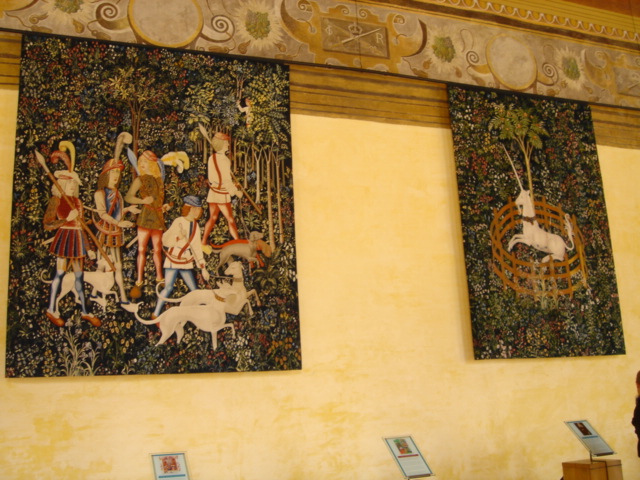 Here is one of the weavers at work. Gail should try her hand at this! 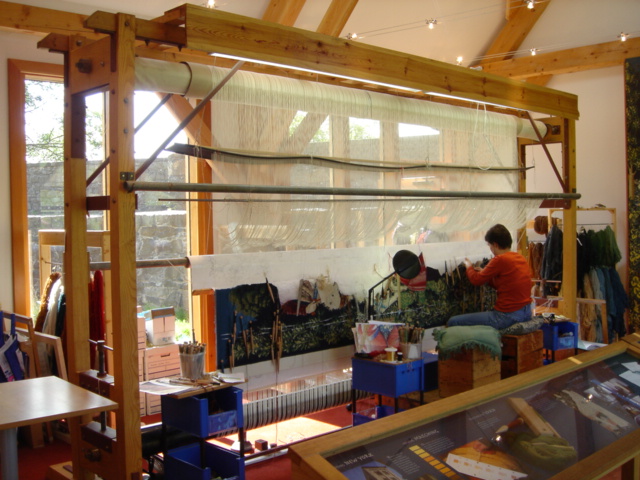 I spent quite a few hours at the castle. Then rather than getting on the bus, I walked down to a couple of other sites. One was the Old Jail. 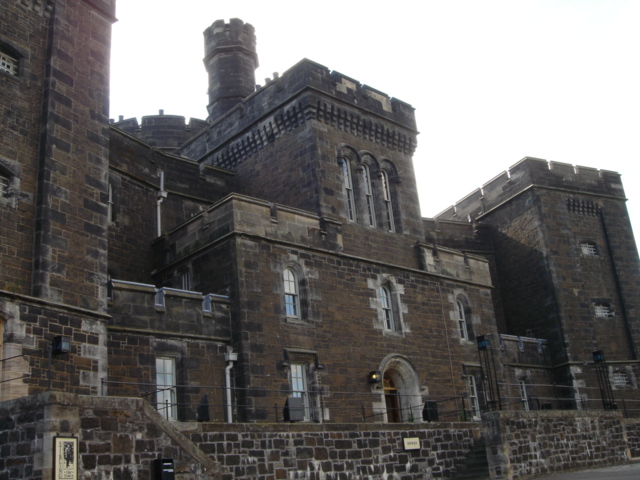 This actually represented an attempt at reform in Scotland. The original jail...the Tolbooth...is across the street. There prisoners were kept, 20-25 to a cell in rank conditions. In this jail they were moved to austere, but clean, individual cells. I would have to go back and look at dates, but it wouldn't suprise me if this jail coincided with the Scottish Reformation. There were the religious concerns for humane treatment, but the austerity seemed to be what a Calvinist prison would probably be. Eventually, however, superintendents changed, and abuse once again became the norm. So it seems to go with human beings who are given complete control over other human beings.

I did climb up to the top of the round tower you can see in the back. From there I was able to get a picture of the Church of the Holy Rood (or it may be spelled Rude here...I can't remember). The church was closed when I stopped by, but I'll get there another day. 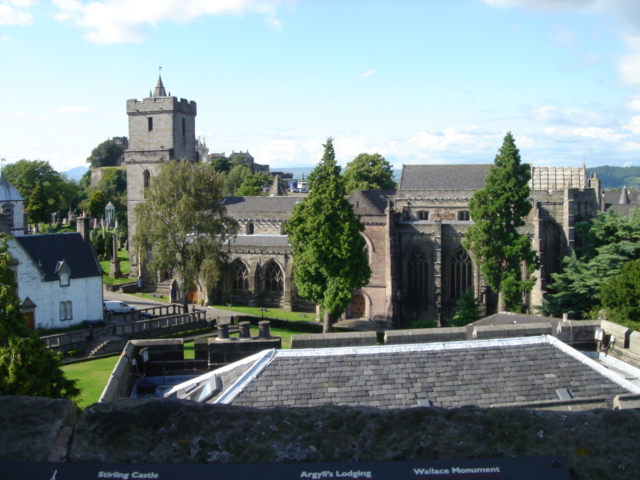 The jail was one of the sites for the tour bus, but when I got down there, I saw I had missed it, and it was the last bus of the day. So I wandered down to the shopping area on King's Street, where I did manage to catch it. That took me back to the monument, and I walked around the hill and back to the house. I stopped on the way for fish and chips, bringing them back to the house.

I was greeted by the rest of the Butterfields, who had returned from a week sailing. We had a pleasant evening, including John taking me here to the University, so I could see where I was going.
- posted by Anne Robertson @ 7:40 PM