And a soggy good evening to you all. I am back in Stirling. It is raining. It is sunny in Aberfeldy now, so I suspect I brought the rain with me. I did not bring my raincoat, however. It is back in Aberfeldy. I'll get it Sunday, when Peter and Nancy come to church.

In any case, here are the pictures that I couldn't convey yesterday. My home away from home was the Mavisbank B&B. 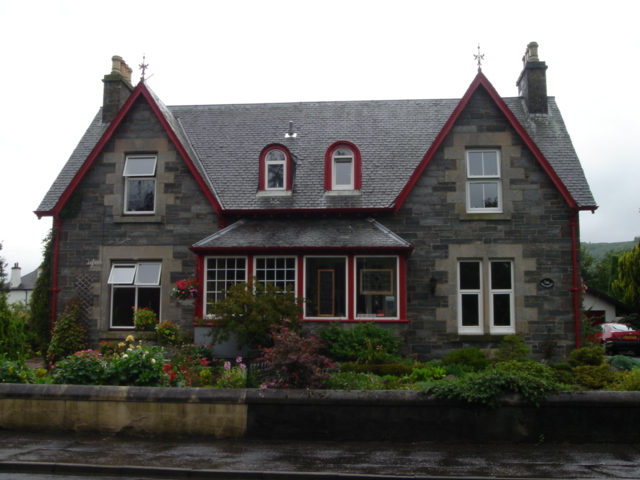 Their regular guests could not get to them, as all roads in and out of Aberfeldy were closed last night, but that also meant that some other folks who had intended to leave could not do so. So it was a full house with me and four Dutch men traveling by motorcycle. They went on this morning to Inverness.

Given that I was stranded (in Robertson territory at least!), Nancy and I decided to go out and "flood watch." Just across the street from the Mavisbank is the River Tay. Often in summer you can walk across it. Here it is as it travels under a famous bridge. After the 1715 Jacobite Rising (in which the Robertsons took part), General Wade from the new British Government (act of Union in 1707 brought together...rather unwillingly...England and Scotland...thus the Rising by those who weren't happy and wanted their King back) was charged with making roads into the Highlands more accessible, so that troops from the south could more easily get up there and squash any trouble. His roads have lasted. This bridge is part of it, built in 1734. It is the only one of his bridges that still carries cars. We went across it to a place for lunch yesterday afternoon and were one of the last cars back across before they closed that road. In any case, here is the bridge and the Tay...the scene from the front of Mavisbank. I doubt you could wade across it just now. 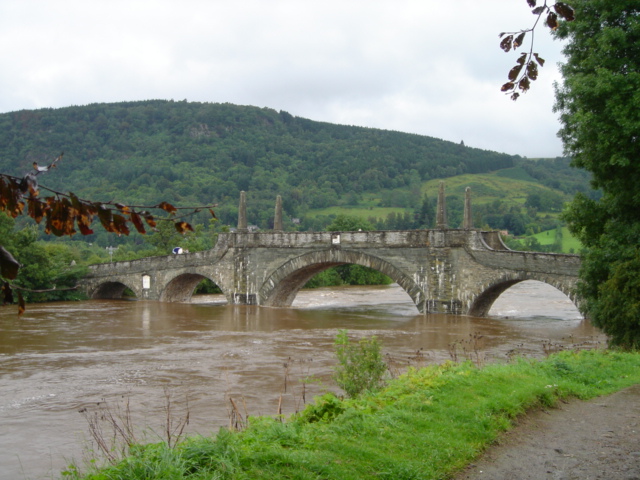 So, perhaps you thought you would take in a bit of golf? 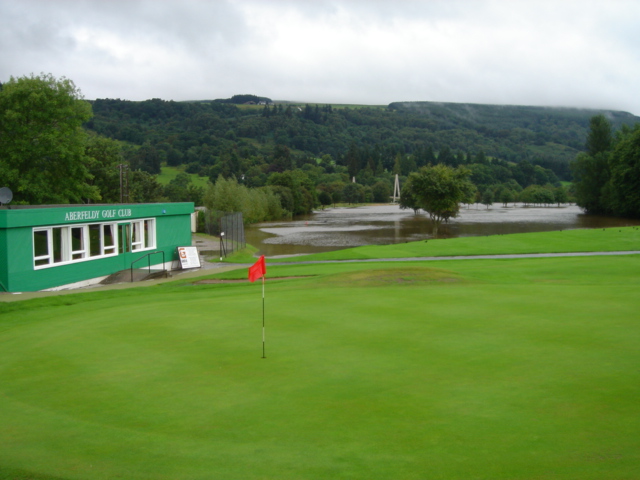 Well, you can do that hole. But maybe not this one. 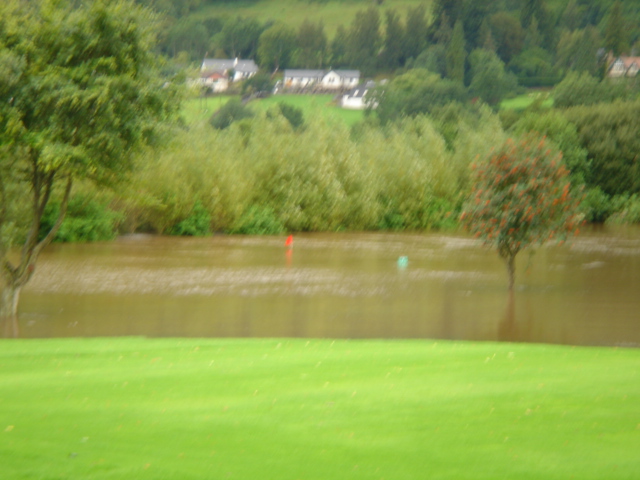 (Sorry about the blur). This next one has a tough water trap. 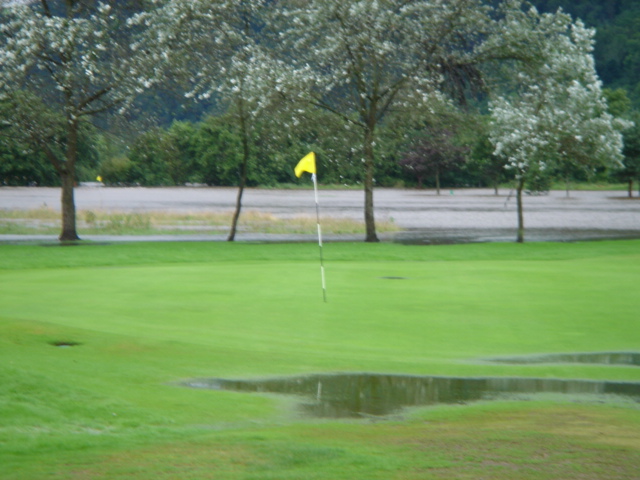 Okay, so not golf. Tennis anyone? 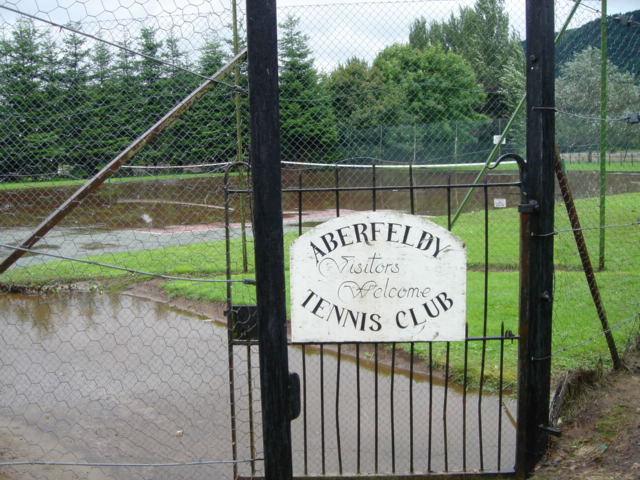 Maybe you just want to do a bit of camping. 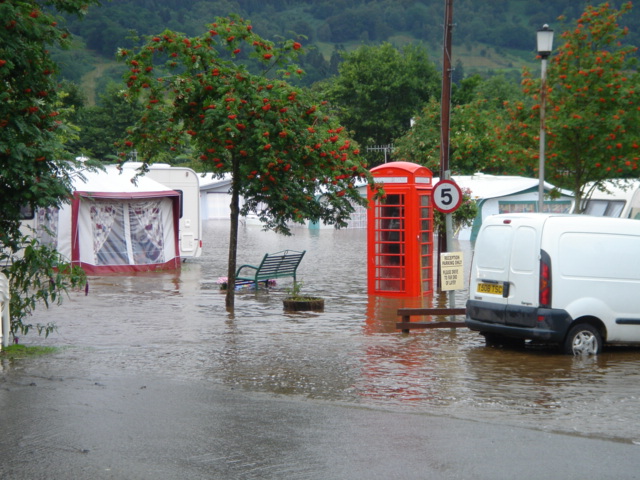 Here are a couple more reasons why you shouldn't leave your camping gear unattended. 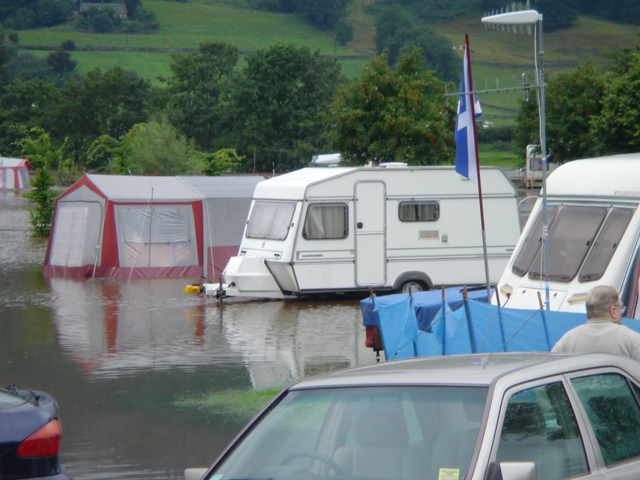 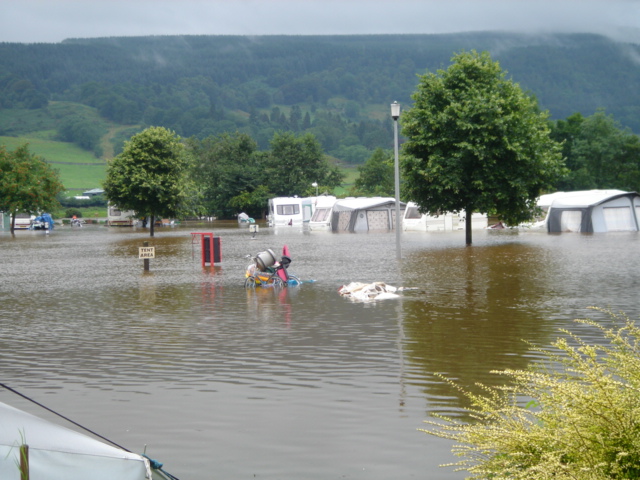 So you could do a bit of hiking. There's a nice trail up the hill to an area called "The Birks." The path now is archaeologically interesting, since with the surface washed away, you can actually see how the path was laid. 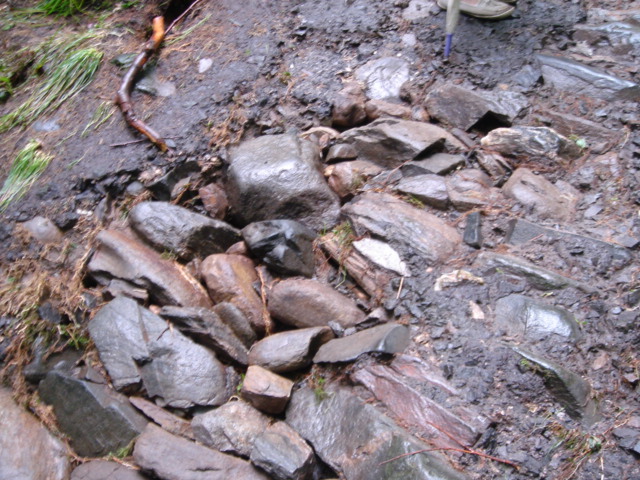 It's a nice hike, but there are interruptions. It does seem that there ought to be a bridge here. 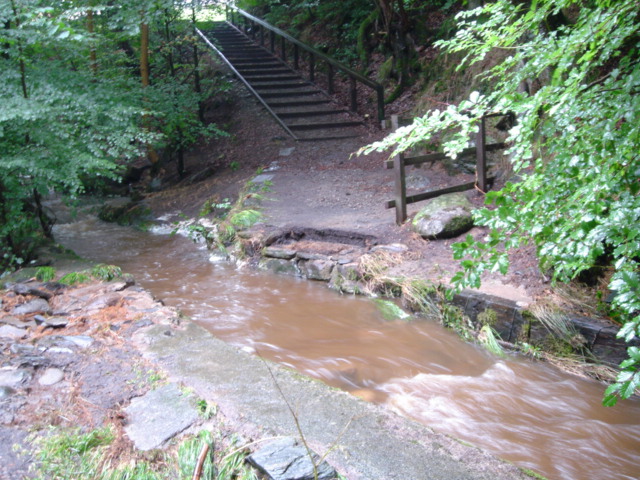 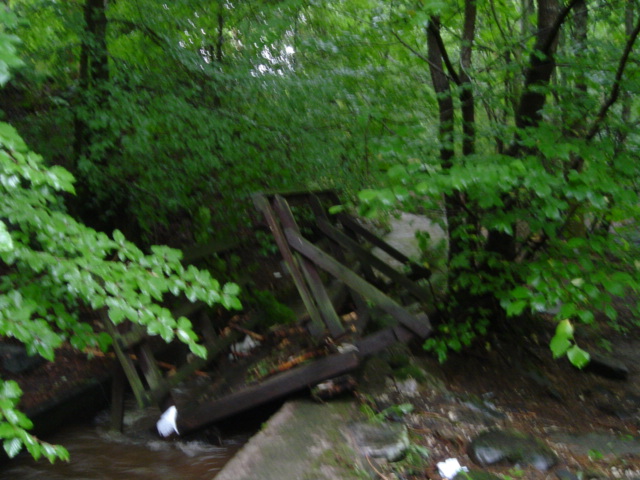 You have to wonder if this one in town is going next. 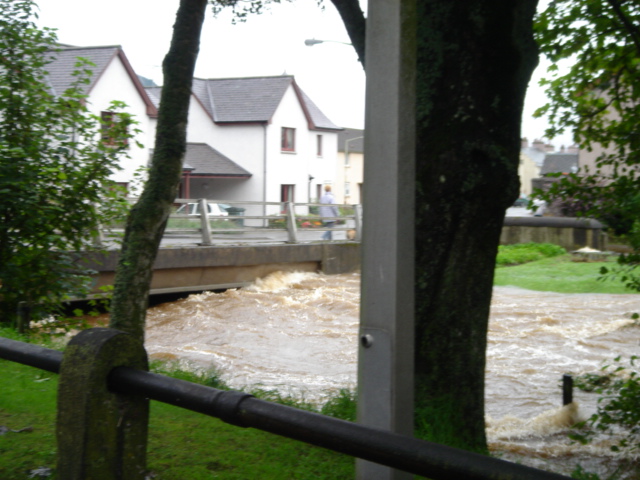 These little streams are called "burns." Nothing like a gently flowing little burn. 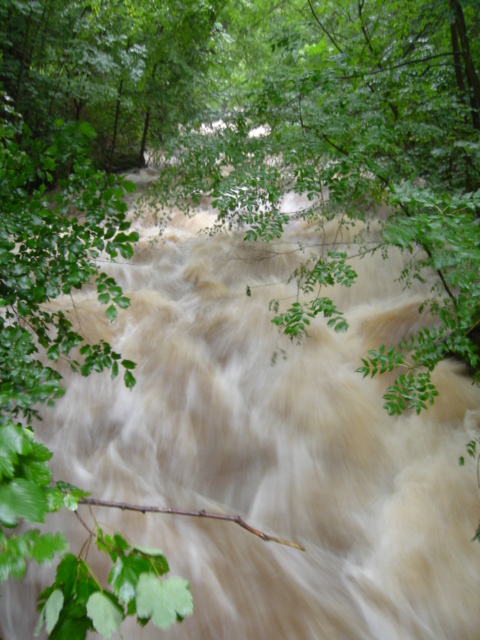 There was another bridge of note in the town...spanning another little burn on the far side of the field where the Highland Games were scheduled for Friday and Saturday. 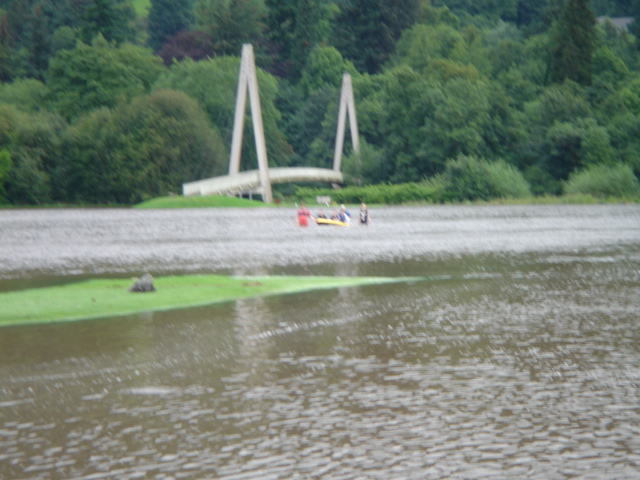 Those are some teenagers who found themselves stranded on the bridge. Lots were watching them...as there was little else to do in town. 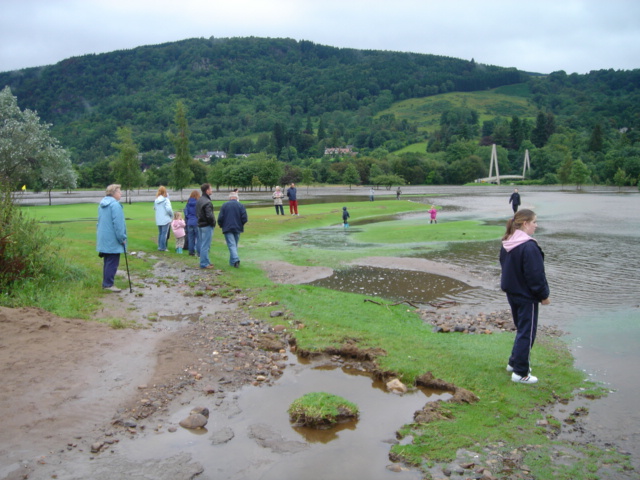 And some thought the floods were a gift from heaven. 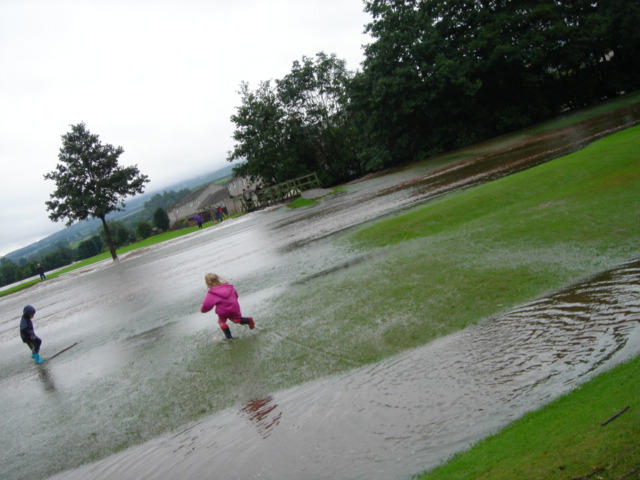 Some of us just saw a photo op. 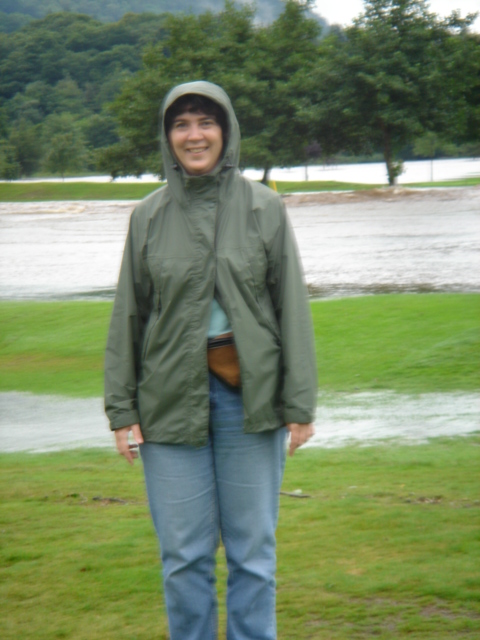 Walking around town did give me a chance to get a picture of one of the silly little roundabouts. And this isn't even the smallest I've seen. Why on earth would you put a traffic circle here? 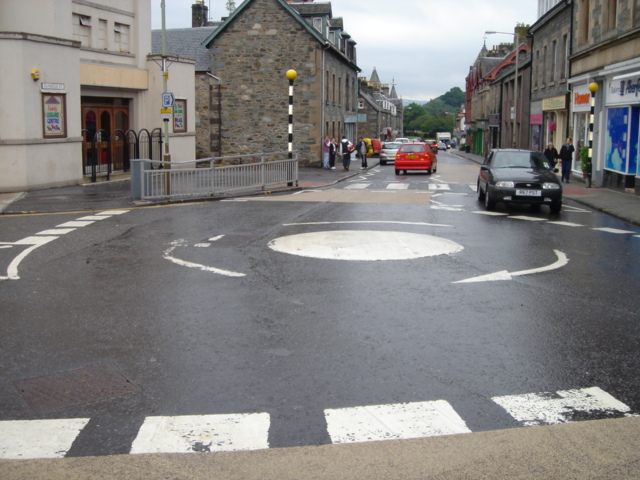 So that's the scoop. Maybe tomorrow I should find out if there are any drought afflicted areas. If I plan to go there, I'm sure it will rain!