Morning began as the others...rising early, setting up for breakfast, then heading to worship. This morning was another storytelling session, so I headed to the Abbey for another morning with Russell. He told us stories about the man who counted.

A man was on his way to Arabia on his camel. While traveling, he met a man who was pointing at a tree and shouting "6,567! 6,567!" The man on the camel stopped. "What are you doing?" he asked. "What are you shouting about!" "The leaves on that tree," said the man. "There are 6,567 of them!" The man on the camel was astounded. "You know that?" he said. "Yes," said the man. "And there are 12,954,694 blades of grass in that field over there." The man on the camel was even more amazed. "Well," he said, "if you can count like that, you can make a lot of money. You shouldn't be just out here counting leaves and blades of grass. Come with me to Arabia."

So the man who counted joined the man on the camel and together they rode on. Soon they came to three men who were obviously in a heated argument. The two men on the camel stopped. "What is going on here?" they asked. "Why are you arguing so?" One of the arguing men came to explain.

"We are all brothers, the sons of one man, and our father has died. He left us an inheritance of those camels under that tree, but we cannot settle the issue amongst ourselves."

"Why not?" asked the man who counted, "Were your father's wishes unclear?"

"Oh no," said the son. "They were quite explicit. That is, in fact, the problem. You see, our father had 35 camels. He has left half of them to one of us, a third of them to another, and one ninth of them to the third." The first man on the camel puzzled aloud. "Well, you will have to slaughter and divide the beasts amongst you."

"And that is why we argue," said the son. "None of us wants half of a dead camel. We must divide them differently. But my brothers will not go against our father's wishes."

"Then the man who counted spoke up. I can solve your problem," he said.

Okay...you have until the end of this day's blog to figure out how to solve the problem to everyone's satisfaction. You may not kill a camel. Now for the other news of the day.

The day was stunningly beautiful and we had a free afternoon. I hadn't really had time to visit the shops yet, so I set out to do that. There aren't a whole lot of commercial establishments on Iona...or a lot of any sort of buildings period...so that didn't take too long. With a couple hours left before supper and a glorious day, I decided to head for the one part of the island I had seen, but not visited...the top of Dun-i (prounounced dun-ee)...which is the highest point on the island.

The hill itself is very close to the MacLeod center and all the sheep went up it's slopes to spend each night. As I climbed up I thought to myself, "I need to be sure to get a picture of the hill itself from a distance so I can put it on the blog." But I forgot.

Anyway, I set off down the road a bit to a stile gate where I entered the sheep pasture and headed for the hill. The hill goes pretty much straight up. If I remember right, it's somewhere on the order of 300 ft. high. Rocks...no trees...some boggy places.

I took pictures as I climbed, but realized at the top that I had the camera on the high setting, which again means I can't post the pictures here until they are re-sized at home. But once I got to the top, this is what I saw around me. 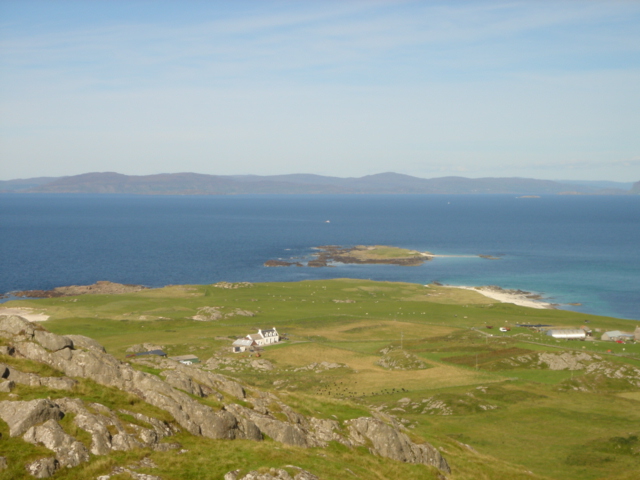 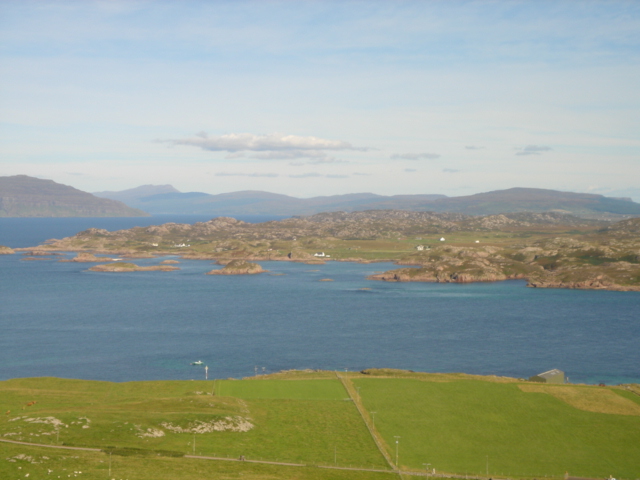 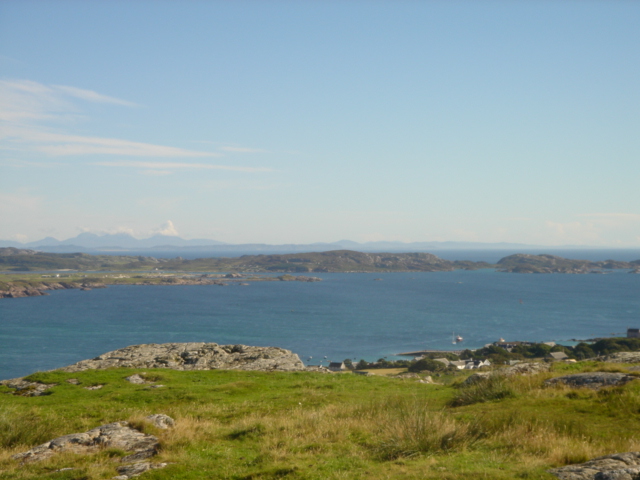 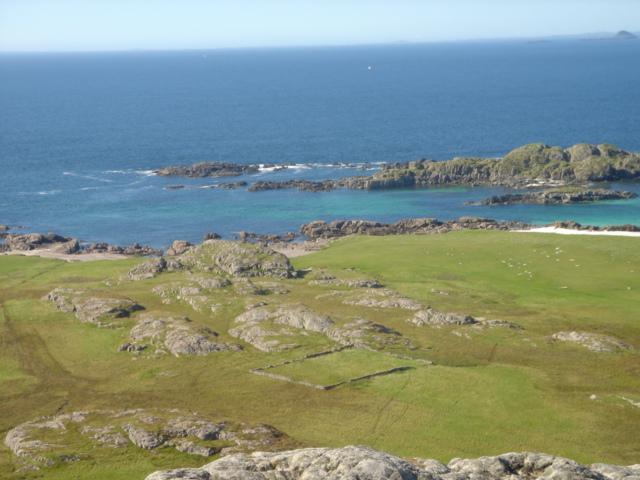 And in the center of the little plateau at the top was this: 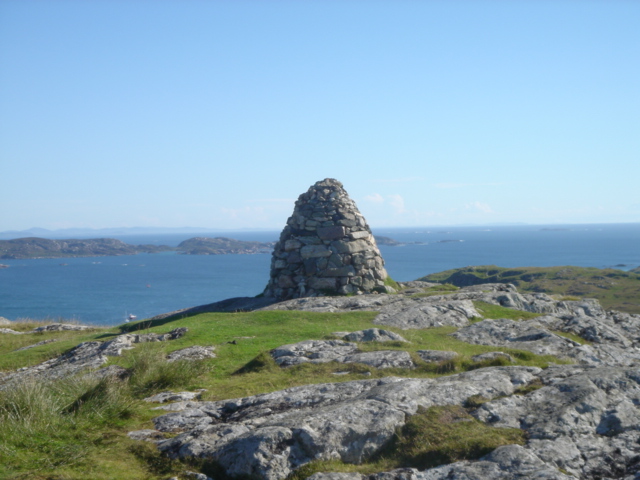 There is no entry or exit, and no one knows for sure what it is. A cairn? A marker of some event? A memorial to some feat now unknown? I did notice that there was this pressed into some of the bits of concrete or whatever it is holding some of the rocks together. 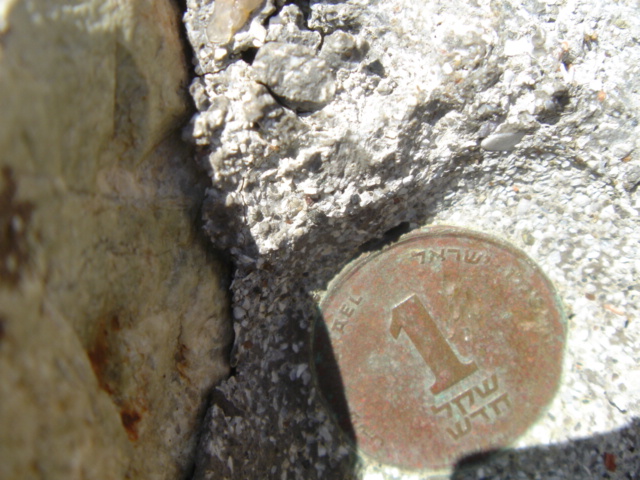 Why a one shekel coin is here, I don't know either. We're quite a way from Israel. But my eyes were ever drawn back to the view around me. 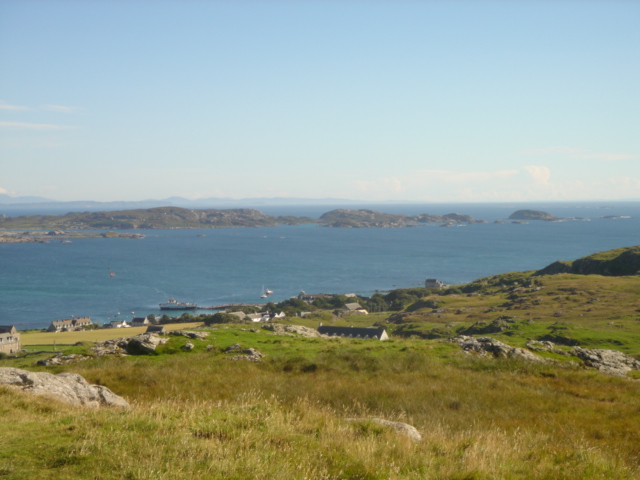 Those gables sticking up just behind the plateau belong to the MacLeod Center where I was staying. The building just cut off on the far left is the Abbey.

I sat up there for some time. It was quite windy, but the back side of the cairn or whatever it is provided some shelter. I missed one of the wee sings to climb up here, but it was such a splendid day, I couldn't bear to be indoors. And who knows what weather Thursday would bring? All too soon it was time for supper and I needed to start down. The way down was not nearly as obvious as the way up had been, and I ended up in several places where I had to climb rather than walk down as I had picked a steeper path. But now and again was a chance to take another picture. 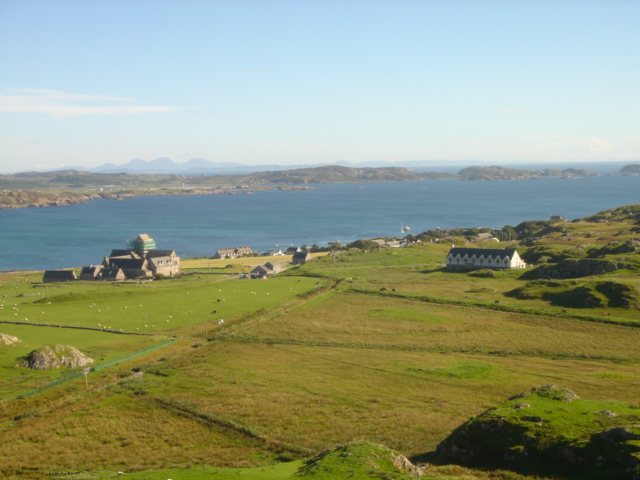 From here you can clearly see the MacLeod Center (above right) and its distance from the Abbey (above left). 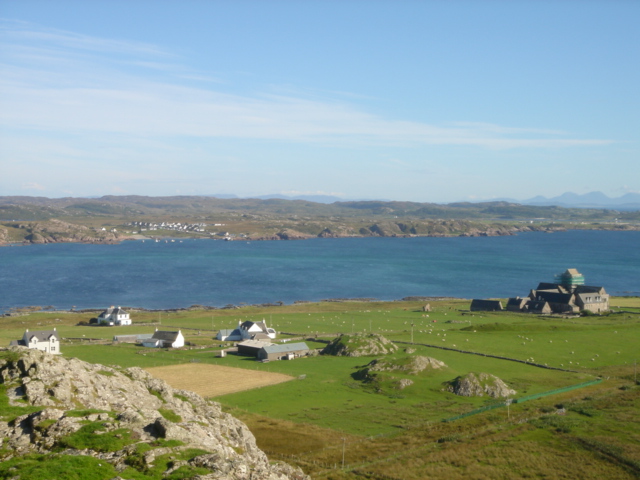 No, there is not a nice, gentle slope just beyond those rocks. But that's the way I went down. As a result, I became much more aquainted with the heather. 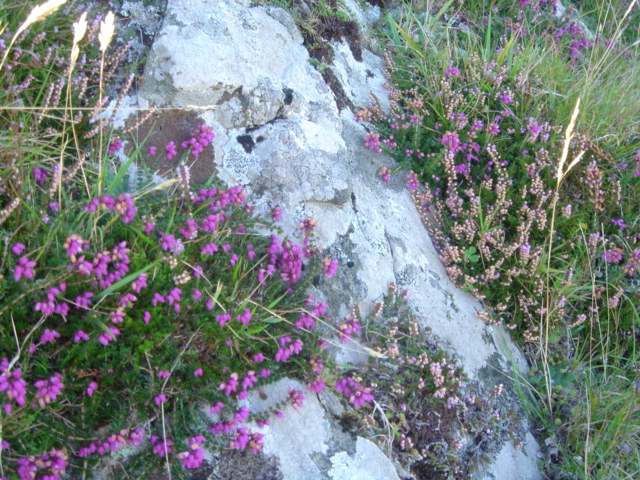 On Tuesday's pilgrimage, I also discovered why the old Highlanders were content to live outdoors all summer. The book I mentioned way back at the beginning of the blog about Gaelic culture said that while people stayed in their homes during winter, in summer, they took off the now-grimy thatched roofs of their homes and headed with the cattle up into the sheiling, living outside until the weather forced them to thatch new roofs and go indoors again. What I learned on the pilgrimage is that heather is about the best nesting material anywhere. At one of the points we stopped on a heather topped hill and it was far more comfortable than most chairs I have occupied. Even though I was sitting in bushes, there were no scratchy twigs or thorns...just this wonderful heather that shaped itself around your body as if it had been custom made for you. Absolutely perfect. I was sure to thank it when I got up.

Anyway, I wasn't sitting down in this heather...I was lucky to have a place where I could steady myself and get a picture. Then it was back down to the pasture, where I had to ford a bog to get back to the path that led to the stile gate where I had entered.

And now...how many of you have figured out the camel problem? Remember that the man who counted and his companion are riding on a camel. The answer is for them to give the sons their camel. That makes 36 camels. One son then gets half...18. Another son gets a third...12. The last son gets a ninth...4. So all three sons have what they were promised and there are now two camels left over. The first man gets his camel back and there is an extra one for the man who counted.